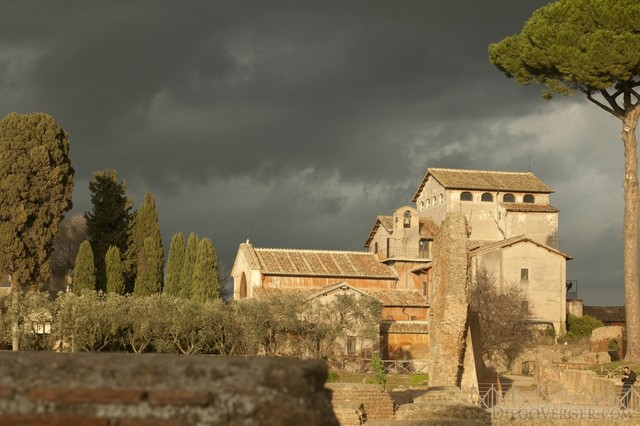 The Church of San Bonaventura al Palatino is located at the top of this hill and dates back to 1625.

On the ceiling of the passageway of the Arch of Titus, you can see a depiction of the apotheosis or deification of Titus with an eagle. The columns that adorn the sides are of the composite order, as it was customary in memorial buildings of the time.

The Arch of Titus is another triumphal arch located in the Roman Forum, near the Colosseum. This is a detail of the relief in the passageway of the Arch of Titus representing the Menorah scene, related to the siege of Jerusalem in the year 70, where soldiers take the spoils of the Jewish temple in Jerusalem. The arch was commissioned by Titus’s brother, Domitian, to commemorate the "victories" of Titus. 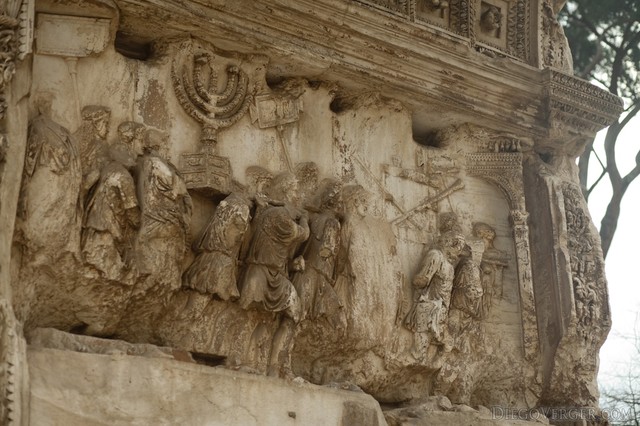 The temple of the Dioscurs, or temple of Castor and Pollux, with its three still standing columns in the Roman forum.

Photo of the Roman forum, with the ruins of the temple of Caesar in the foreground on the left, and the remains of the basilica Emilia behind it, on the center of the image.

Palatine hill as seen from the Colosseum; and to the right, the colossal columns of the Sacra street which leads to the Roman forum and the Arch of Titus, included in other pictures. The building at the top of the Palatine hill is part of the church of San Sebastiano al Palatino.

In this photo you can see several structures in or around the Roman forum. The Arch of Titus is located below on the left. Also in the foreground, on the bottom right of the photo, the building known as the Curia Julia, or Senate House, commissioned by Julius Caesar. Behind that building, and rising above, the dome and façade of the church of Saint Luke and Saint Martina. On the top left, beyond the Roman forum, the tallest building corresponds to part of the terrace of the Quadrigas on top of the monument built in honor of Vittorio Emanuele II, first king of united Italy. On the middle right of the photo you can see the dome of the Valentini palace, and the figure that stands out on its left, above the horizon, is the statue on the column of Trajan, in the Trajan forum.

In this photo it can be better appreciated the size of the Vittorio Emanuele II monument with the terrace of the Quadrigas, as well as the Tabularium building on the left. Between the Tabularium and the Vittorio Emanuele II monument, you can see part of the Basilica of Santa Maria in Ara coeli (St. Mary of the Altar of Heaven). On the right of the photo is the church of St. Luke and St. Martina, and lastly, on the bottom center, the Arch of Titus.

In the Roman Forum there is a high density of ruins from Imperial temples and palaces.

Colosseum from the Palatine

Ancient stairs of the Palatine

One of the ancient stairs in the Palatine hill.

Ruins next to the Domus Flavia

These ruins are between the Domus Flavia, or Flavian Palace, and the house of Livia in the Palatine. 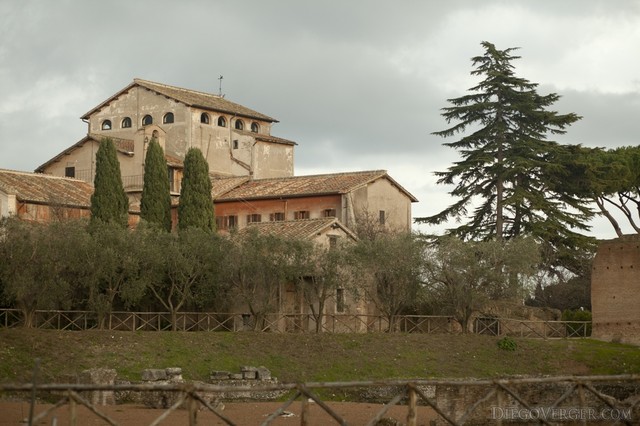 Another view of the church of San Bonaventura al Palatino framed with stormy sky.

Ruins next to the Hippodrome of Domitian

Ruins of a building located next to the Hippodrome of Domitian on the Palatine hill.

These are some of the still standing structures that surround the stadium of Domitian. On the bottom, the pillars and the edge of the oval structure of the stadium that still persist today.

Statue of the goddess Rome

Statue of the "Tiber" river

At the sides of the fountain of the goddess Rome on the Campidoglio there are two statues represening the Nile and Tiber rivers. The colossus in this picture represents the Tiber, and the children below on the left represent the twins Romulus and Remus, playing with the she-wolf who, according to legend, nursed and protected them. Before the wolf there was a tiger, and the statue did not represent the Tiber but the Tigris river. 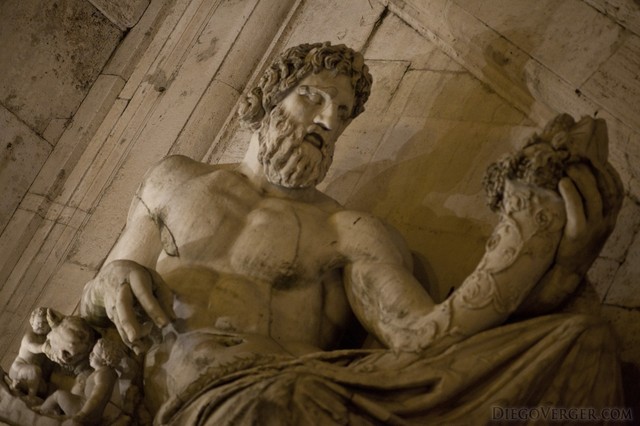 Detail of the "Nile" river statue

This is the statue on the left of the fountain of the goddess Rome in the Campidolgio, which represents the Nile river. The giant rests on a sphinx and holds a cornucopia, or horn ("cornu") of abundance ("copiae").

Statue of the "Nile" river 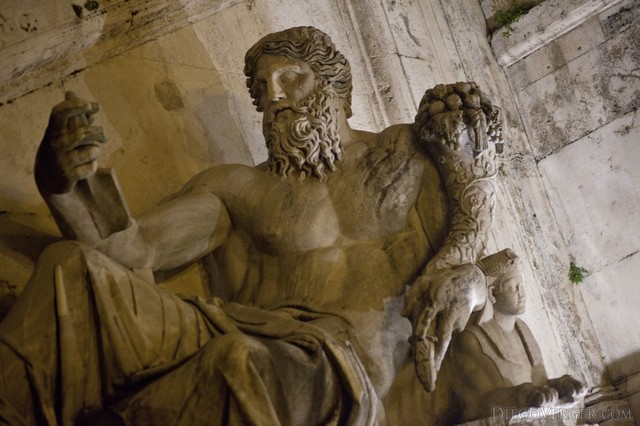 Another view of the statue of the Nile river, part of the fountain of the goddess Rome, in the Campidoglio.