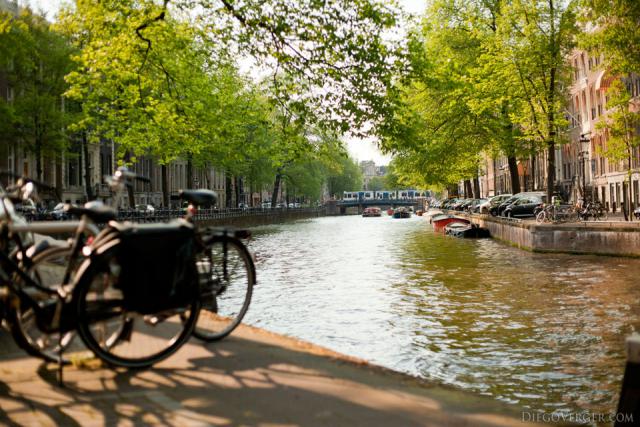 Bikes parked next to the Herengracht canal and a tram crossing the Koningssluis bridge.

Stalls of the Amsterdam Flower Market, an original and unique floating market.

Art museum inaugurated in 1885, which explores the art history of the Netherlands. 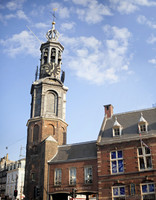 The Mint Tower ("Munttoren") from the 17th century, known under that name since it was used for a time to mint coins. This was the location of the west tower of one Amsterdam’s access gates, which was added in 1480 to the medieval wall. The carillon was made by the brothers Pieter and François Hemony.

An underpass bicycle path under and through the museum. 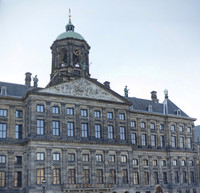 The palace viewed from Dam Square.

The Singel canal and the Bloemenmarkt

On the right, the "Bloemenmarkt" or floating flower market in the center of Amsterdam. The tower near the center of the picture is the "Munttoren" (Mint Tower).

Detail of the entrance to the bike tunnel through the Rijksmuseum

Next to the Blauwbrug in the Amstel canal, you can find this bridge dedicated to the German hero who helped hundreds of Jewish children escape from the Nazi persecution during World War II. 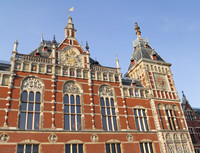 An 1889 building designed by the architect Pierre Cuypers, who also designed the Rijksmuseum building, among others in the city. The tower in the picture is the eastern one, which is a conventional clock tower.

This tower indicates the wind direction, especially important for sailing and the maritime commerce during the 19th century.

Detail of the relief on the western tower

This relief on the western tower of Amsterdam Central Station was made by Frantz Vermeylen and depicts, on the upper part, Apollo, Ceres and Vulcan. On the lower part, Electricity, Industry and Steam are personified.

Extreme bicycle parking over a canal in Amsterdam

A high-adrenaline activity for busy people.

Central north-west tower of the Rijksmuseum

Stone bridge over the Amstel River known as Blauwbrug (blue bridge), since in olden times it used to be a wooden bridge painted in blue, until it was replaced by the current one in 1883.

Houses along the canals of Amsterdam

The pulleys on top of many houses are a frequently essential element to bring furniture and other large objects into the tall and narrow houses along the canals.

Tower of the Zuiderkerk as seen from the Amstel

Bell and clock tower of the Church of the South ("Zuiderkerk"), in the Nieuwmarkbuurt neighborhood of the city center. The carillon of this church was made by Pieter and François Hemony.

Façades of houses along the canals of Amsterdam

Bridge over the Rapenburgwal canal.