Propylaea of the Athenian Acropolis

"Προπυλαια", the monumental entrance to the Acropolis.

Temple of Hephaestus in the Ancient Agora of Athens

The Acropolis in Athens

North wing of the Propylaea in the Acropolis

In this section of the Propylaea was located the first known art gallery in the world.

Detail of a corner of the Parthenon's east façade 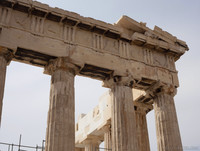 Above the Doric columns, a frieze with triglyphs, which divide metopes decorated with low-reliefs.

Side view of the Temple of Hephaestus in the Ancient Agora

Panoramic view of the Ancient Agora in the city of Athens 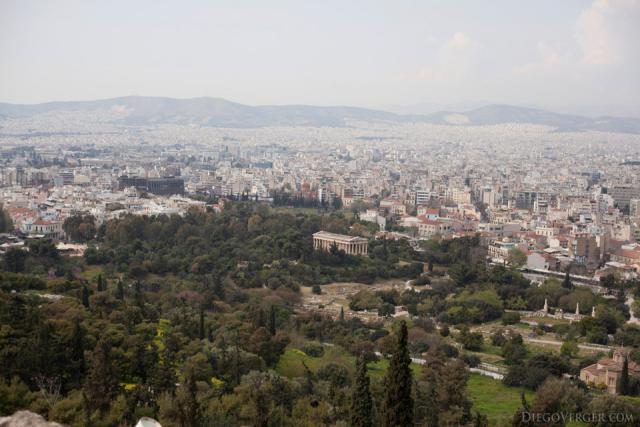 Columns of the Roman Forum or Roman Agora of Athens 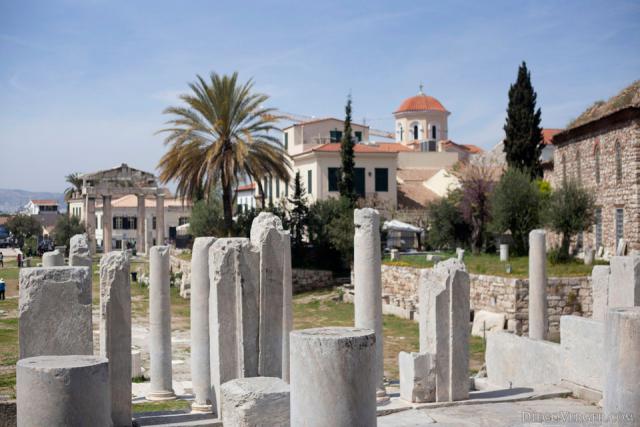 Church of the Holy Trinity

Photo of the church "Αγία Τριάδα" (Agia Triada) next to the archaeological site of Kerameikos.

Tower of the Winds at the Roman Agora

Marble clock tower dating from the I century B.C.

Lions at the Beulé Gate of the Acropolis 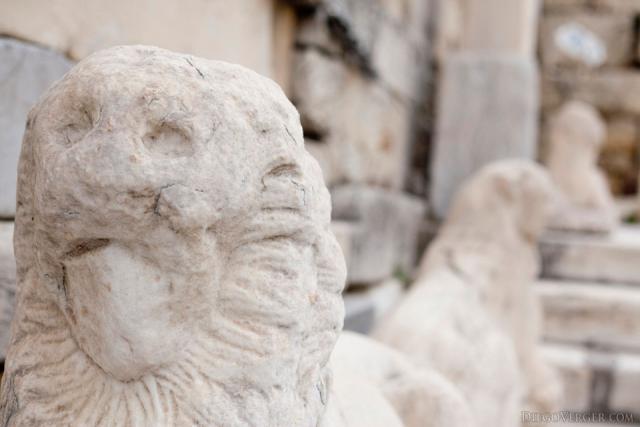 In the background you can see the Parthenon at the Acropolis.

Detail of the Corinthian columns of the Temple of Olympian Zeus

Panoramic view of the Temple of Olympian Zeus in Athens

From this angle you can better see the knocked down column and its composing parts, from the base to the Corinthian capital, and all the modules in its shaft.

Sepulcher next to the Temple of Olympian Zeus

Northwest façade of the Temple of Hephaestus 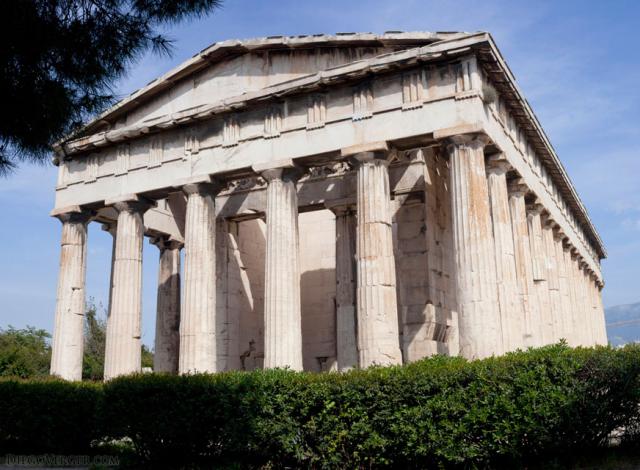 Frieze of the Temple of Hephaestus

Frieze in the opisthodomos of the Temple of Hephaestus, which represents what seems to be a battle between centaurs and humans.

Detail of the columns of the Temple of Hephaestus

Red poppies at Kerameikos in Athens

The archaeological site of Kerameikos. 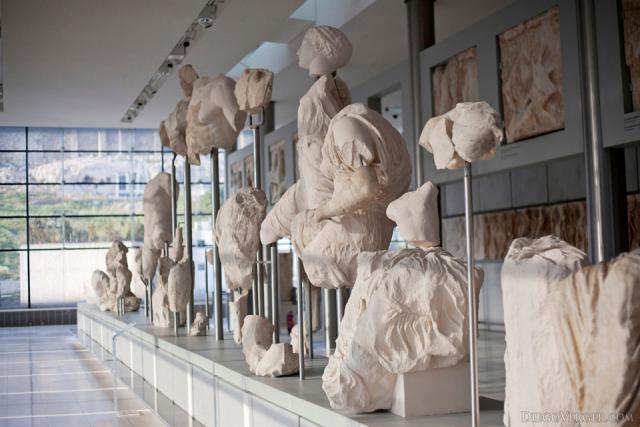 This museum to the south of the Acropolis holds a collection of pieces proceeding from the Acropolis and its surroundings. Aside from its collections, a highlight of this museum is the panoramic windows of the building and its orientation towards the Acropolis, which allow a view of the hill and some of its temples from within the museum while appreciating the archaeological findings thereof, creating a more immersive experience.

Floral acroterion of the Parthenon 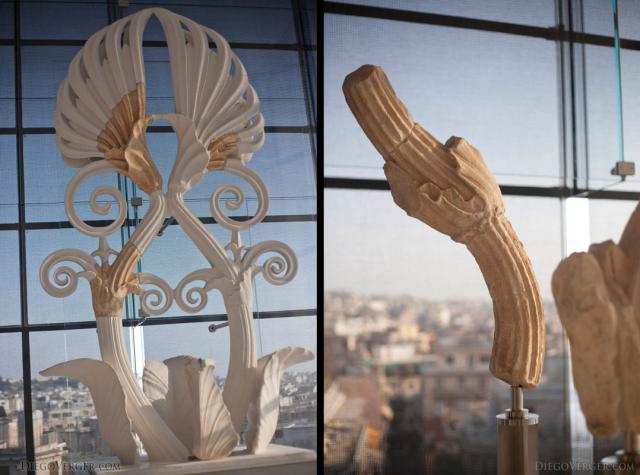 On the left, a reconstituted ornament which would have belonged to the Parthenon’s pediment. On the right, one of the original fragments of these floral patterns.

Front, profile and 45 degree photos of Hadrian’s sculpture in the Ancient Agora of Athens, next to the Metroon [Μητρῷον] ruins.

Southeast façade of the Temple of Hephaestus in Athens 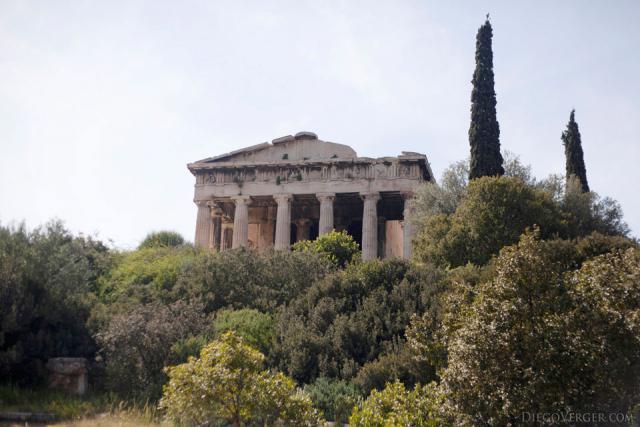 Low-relief in the Ancient Agora

In the background, the Church of Agia Triada.

Anafiotika next to the Acropolis in Athens

A small quarter known as Anafiotika, next to the Plaka quarter, on the northeast slope of the Acropolis hill, which was built by workers who came from the Anafi island, in the Cyclades Archipelago, to the east of Santorini, and migrated to this area in order to build a palace for King Otto of Greece, and in their settlement they reproduced the features of their original homes, white houses with blue doors.

Ancient Agora and Temple of Hephaestus

In the foreground you can see the Middle Stoa, from the II century B.C., and remains of some of its columns. This building was a covered gallery which divided the Agora in a north and a south section.

View of Athens and the Agora from the Acropolis

Ornamental remains among wild vegetation in the Ancient Agora

Southeast end of the Pompeion in the Kerameikos necropolis

Temple of Hephaestus in the Ancient Agora

Architrave above the Ionic columns of the Roman Agora of Athens

A street on a slope of the Acropolis hill 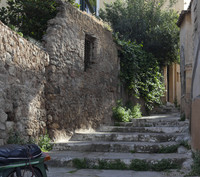 Erechtheion's south façade in the Acropolis of Athens 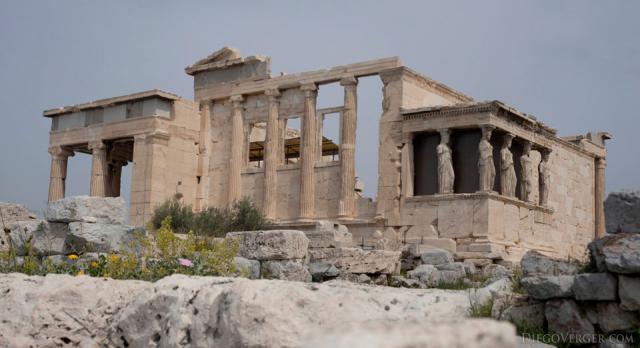 Temple to the north of the Parthenon, with Ionic columns. On the right you can see the Caryatids portico, with replicas of the original columns sculptured with female shapes, which although they are an original architectural element, according to the Roman author Vitruvius, they are traces of a dramatic and sad episode of conflict between different Greek populations. They represent the slaves of Καρυές (Karyes, Karyai or Carya), a population which made an alliance with Persia in its war against Greece, and therefore after the Greek victory its men were slain and the Caryatids or "maidens of Karyai" were taken as slaves. Afterwards, these statues would be placed below the entablature of the portico to symbolically represent the burden these women had to bear as atonement for Carya’s treason, and as a remainder to future generations of such penalty.

The "Herodeon" is a theater built between 160 and 174 B.C. on the hill slope of the Acropolis.

Internal façade of the Odeum or Odeon of Herodes Atticus

Restoration works of the Parthenon in 2014

Path in the Ancient Agora

In the background, you can see the National Observatory of Athens and the Church of Agia Marina.

The Greek flag behind the remains marks the lookout on the west side of the Acropolis.

Architrave of the Temple of Rome and Augustus

Part of the ruins of the only temple in the Acropolis consecrated to the goddess Rome and the Emperor Augustus, to the east of the Parthenon. It dates from the late I century B.C.

Mount Lycabettus as seen from the Acropolis

At the summit of that mount, also known as Lykavittos hill, you can see the Church of Saint George [Άγιος Γεώργιος]. On the right, you can also distinguish the beige building with a triangular pediment, which corresponds to the parliament of Greece.

The archaeological site of Kerameikos [Κεραμεικός] 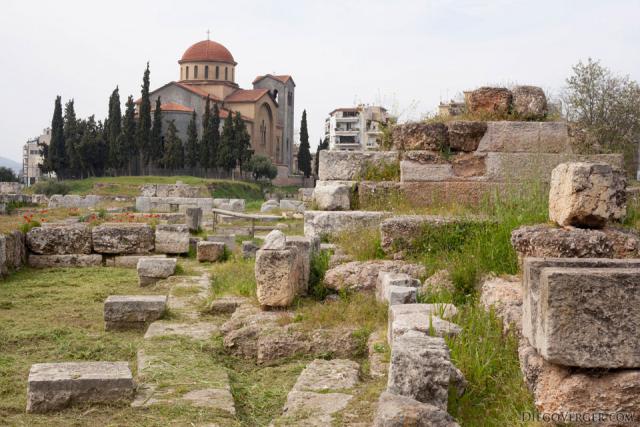 Wild poppies in a slope of the Acropolis hill 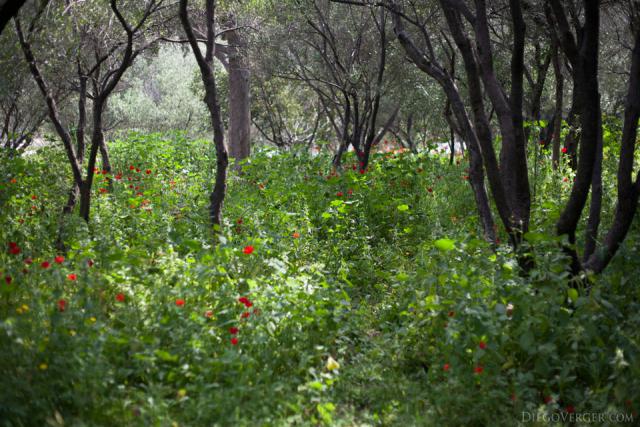 Fountain House next to the Dipylon of Kerameikos in Athens

The Dipylon was one of the ancient entrance gates to the city of Athens, it was a double gate, and the most important one.

Areopagus as seen from the Acropolis

The rocky formation in the center of the picture, known as Areopagus, was an ancient meeting place for the court of Athens. The National Observatory of Athens stands out on the hill behind it, with its hemispherical dome. Between the observatory and the Areopagus, you can see the Orthodox Church of Agia Marina. 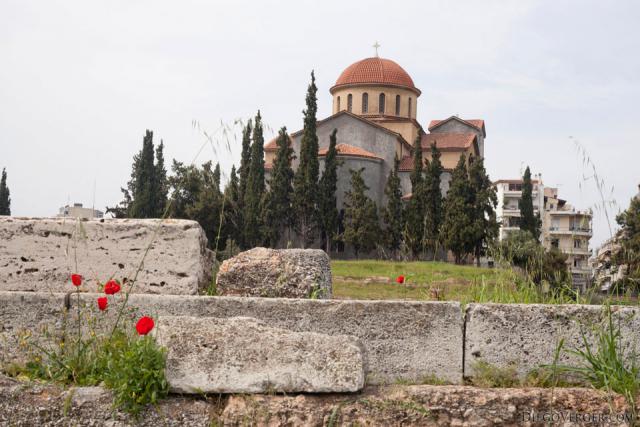 One of the restaurants in the Plaka quarter in Athens

View from Philopappos Hill at dusk 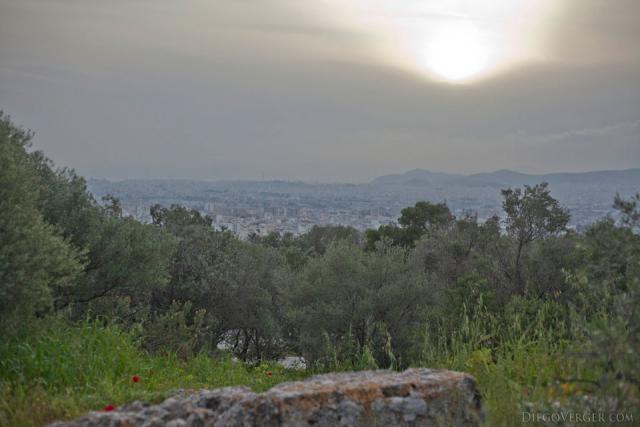 This hill to the southwest of the Acropolis is also known as Hill of the Muses. Socrates’ prison is to be found on its northeast slope.