The Tower of Pisa in Piazza dei Miracoli 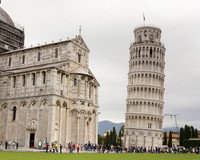 The construction of the bell tower of Pisa began in 1174, and due to its shallow foundation and swampy terrain conditions the incipient building tilted halfway through its completion, an inclination that was compensated later to keep the structure standing and turn it into the worldwide known leaning tower, completed in 1372.

Façade of the Cathedral of Saint Mary of the Assumption 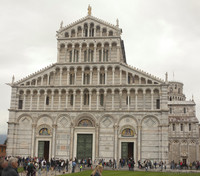 The façade of this cathedral from the year 1092 is inlaid with polychrome marble, just as the Tower of Pisa, and is also decorated with blind arches and geometric shapes on the ground level, as well as loggias with Corinthian columns on the upper levels.

The Putti Fountain and the Tower of Pisa

The initials "O₽A" in the fountain of the Cupids stands for "Opera della Primaziale Pisana," the organisation in charge of the maintenance and protection of the buildings in Campo dei Miracoli, since the beginnings of the construction of the cathedral in 1064.

Detail of the arcades of the Tower of Pisa 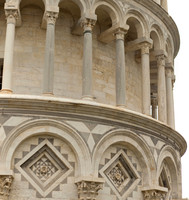 The blind arches on the lower section, and the first loggia of the tower.

Central portal of the Pisa Cathedral 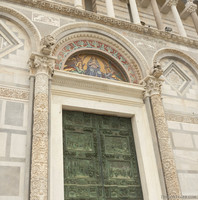 Tympanum, door and columns of the central portal. The ornamental work on these columns has a great similarity with that of the first courtyard of the Palazzo Vecchio in Florence.

Detail of a bronze relief of the Cathedral

Detail of a bronze relief on the main door of the Pisa Cathedral.

Tympanum on the central portal of the cathedral's façade

The baptistery of Saint John 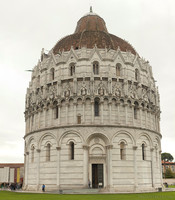 This Romanesque and Gothic style building began to be constructed in 1152 and was completed in 1363, and is the largest baptistery in Italy.

Ornamental details of the Baptistery of Pisa

West and south façades of the Pisa Cathedral 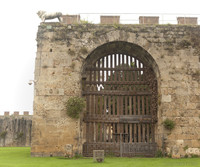 Porta del Leone, part of the defensive medieval wall built in the 12th century, during the times of the Republic of Pisa, located next to the Camposanto in Piazza dei Miracoli.

Camposanto building in the Square of Miracles

Cemetery of notable personalities in the history of Pisa.

Gothic tabernacle over the entrance of the Camposanto of Pisa

Neo-Attic vase and the Tower of Pisa

This vase with Neo-Attic low-reliefs is located next to the Pisa Cathedral, and is a copy of the original, which was moved to the interior of the Camposanto.

Detail of the Corinthian columns of the Tower of Pisa

The columns of the blind arches on the ground level of the tower.

The Tower of Pisa and the south transept of the cathedral

The tympanum of the Tower of Pisa

The six loggias of the Tower of Pisa 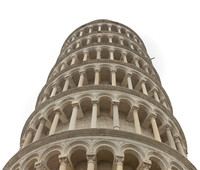 The Tower of Pisa as seen from the northwest

Tower of Saint Mary in the medieval wall of Pisa

The Tower of Saint Mary as seen from the Piazza of Miracles.

Tympanum on the main entrance of the Pisa Baptistery 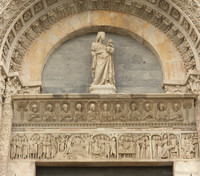 Detail of the low-reliefs on the main door of the baptistery. The statue is a copy of the sculpture "The Virgin and Child" by Giovanni Pisano.

Detail of the tympanum, archivolt and capitals of the south door of the Pisa Baptistery 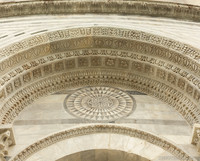 South transept of the Pisa Cathedral 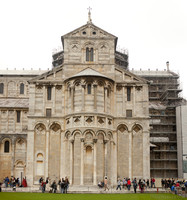 The Tower of Pisa peeking from behind the cathedral