This prehistoric cave was discovered in 1959 by 5 intrepid youngsters from Maro, a town to the south of the cave, who skipped school one day to explore the depths of this cave in a Jules Verne-style daring adventure. The first part discovered were the Lower or Tourist galleries, and later on two more galleries were discovered, the High galleries and the New galleries, which are not accessible to the public. In the Tourist galleries there are no visible cave paintings unfortunately, but there is a wide variety of geological formations, which can be appreciated in this alien world completely unusual for most people living on the surface.

The caves of Nerja are located at the foot of the sierra Almijara. The village in the center and right area below the mountain corresponds to Maro, the home town of the 5 youngsters who discovered the cave. This is a view from the balcony of Europe, the main viewpoint of Nerja, which is part of Andalusia’s “Costa del Sol.”

These are some of the different geological formations present in the caves of Nerja. Besides the numerous stalactites, some stalagmites are also seen on the lower right, which are formed on the ground through water dripping and precipitation of calcium carbonate. A frequent variety of speleothems also seen in this photo is the “parachute” type, which consists of a disc shaped speleothem known as shield, combined with stalactites, conveying it the appearance of a parachute.

This is an area of the Tourist galleries known as “Sala del Belen” (Hall of the Nativity) located next to the entrance of the cave. On the left there is a large column, although not the largest of the cave. The columns are formed when stalactites and stalagmites meet each other.

A conical stalagmite stands out, next to smaller ones to the right. On the left you can also see a complete column.

In the photo on the left you can see two complete columns. The special lighting in the Nerja caves is of great aid in highlighting the different types of formations that would otherwise be somewhat lost without contrasting or tangential lighting.

Since the original entrance used by the modern discoverers from Maro was more dangerous, some research was conducted and a new entrance was prepared for the Tourist galleries, in order to offer visitors a safer way to access the caves. After going down a narrow tunnel for about 10 meters (32 feet) this is the entrance hall where you get a first glimpse of the cave.

In the Nerja caves there are also a great number of flowstones, which are a variety of speleothems formed by the deposit of calcium carbonate on underlying surfaces, generating a solid coat of limestone.

In some areas of the caverns there are white deposits that correspond to a particular type of speleothem known as moonmilk, which consists of a precipitate of mineral substances, such as hydromagnesite, does not solidify, and it often has a soft or creamy consistency. In fact, in 2002, a river of moonmilk in its liquid form was discovered inside a cavern in the Ernio massif, in the Spanish Basque Country.

Some columns, resulting from the union of stalactites and stalagmites, in the largest areas of Nerja, such as the “Sala del Cataclismo” (room of the Cataclysm), reach 18 meters (59 feet) in diameter. Others, such as this one in the Tourist Galleries are still massive.

Draperies and other speleothems

On the left area of the photo you can see what looks like fractured draperies or curtains, speleothems that grow like stalactites, but adopting the form of undulating bands.

Lights of the Nerja Caves

Lighting work is often underestimated, but in the Nerja Caves its importance becomes evident through the use of different types of lights to highlight the particular features of every geological formation, in a fairly extensive lighting system. The original lighting was carried out by Manuel Rubio Jiménez and a group of specialists between 1959 and 1960.

On the bottom right of this photo you can see small formations that correspond to “gours” or rimstone dams, a type of speleothem which adopts the form of staggered dams or basins. The formation on the left seems to correspond to the foundation of a drapery.

According to the archaeological remains found, the Nerja Caves were used or inhabited by different groups of people and animals, for thousands of years. Among the findings there were not only bones of ancient denizens, but also various handicrafts and tools that indicate some activities performed inside and outside the caves. 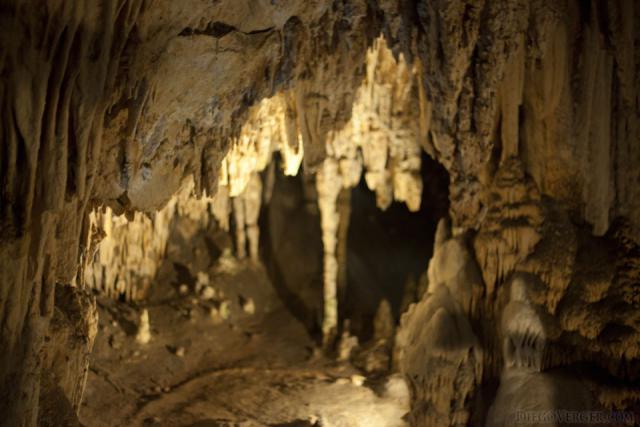 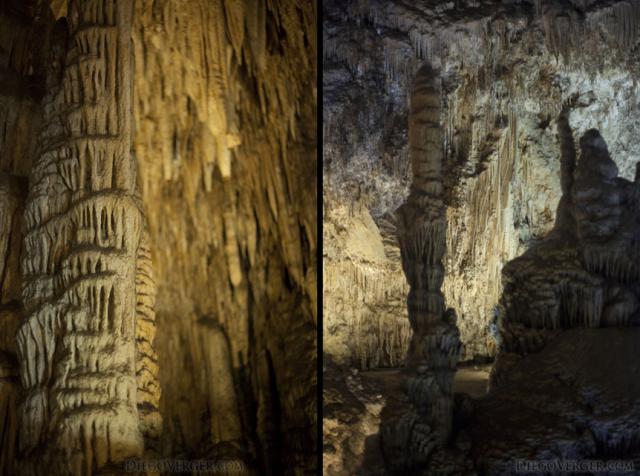 On the left, a detail of a stalagmite; on the right, a stalagmite contrasts against the cave walls.

The pigment and metal deposits, as well as different humic substances of organic origin, generate the various colors present in these underground geological formations.

On the left, some apparently fractured speleothems. 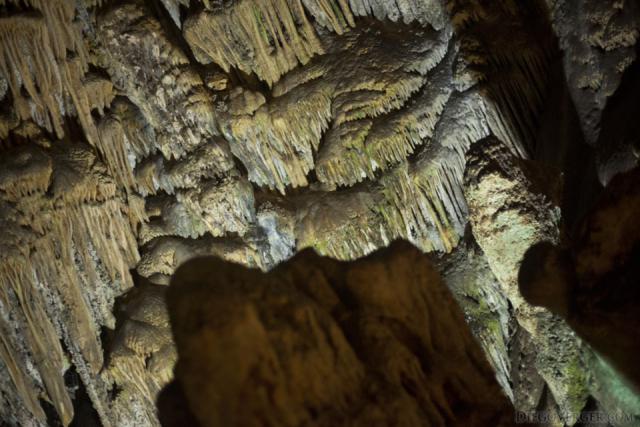 There are a great number of flowstones in the Nerja cave, and the shapes they adopt when covering underlying elements are quite varied. The shields, on the other hand, are formed by the leakage of water through cracks in the adjacent rocks, and the deposit of crystals over time, adopting a disc form; when combined with stalactites they are known as “parachutes”.

In this photo you can see, on the left, a stalactite and a stalagmite, which haven’t united, next to a small full column.

The gap between the highest and lowest parts of the known galleries in the Nerja Cave is 68 meters (223 feet), and is the largest cave discovered in Andalusia.

The great acoustics of this cavern was detected early in its modern discovery, and since then it has also been used for music, dance and other types of performances.

Hall of the Waterfall

One of the most impressive parts of the cave is the area known as Hall of the Waterfall, since it is the first section in which the cave increases its size significantly, after relatively narrower paths, forming a huge hall, over 30 meters (100 feet) high, exhibiting massive stalactites and columns.

The Nerja Caves also provide information about earthquakes produced thousands of years ago, since thanks to the richness and variety of concretions, and their lengthy formation processes, scientists can determine seismic movements produced in the past by identifying not only changes in structure but in the composition of the speleothems.