Detail of the front of the Pantheon of Agrippa or Pantheon of Rome, one of the best preserved architectural structures of ancient Rome. This temple was originally built by Marcus Agrippa in the year 27 BC, but it was destroyed by the fire of the year 80 AD. Emperor Hadrian had it rebuilt by the year 125 AD, and honorably credited Agrippa for this temple, as it can be seen in the inscription of the front "M AGRIPPA L F COS TERTIVM FECIT", which means "Marco Agrippa, son of Lucius, made [this] when he was consul for the third time." In ancient Rome few given names were used, therefore "L" usually meant Lucius.

In Piazza della Rotonda, in front of the Pantheon, there is a fountain which has undergone several modifications over time. The fountain of the Pantheon was originally a basin with statues of two lions, but in 1575 a fountain similar to the current one was designed by Giacomo Della Porta and sculpted by Leonardo Sormani, commissioned by Pope Gregory XIII. Later, in 1711, Pope Clement XI requested modifications to the fountain, and a dedication to him was added, as can be seen in the inscription in this photo. Other artists who participated in the construction of this fountain include Simone Moschino and Giacomo Silla Longhi. Although unfortunately not seen in my photo, the fountain has an Egyptian obelisk at the top, dating from the time of Rameses II.

Another angle of the Pantheon where you can see some ornamental details and the Corinthian columns. Although night photography can sometimes be a challenge, the Pantheon is always well lit and you can see some very interesting details of this impressive ancient structure so well kept throughout the centuries. In this case I did not use a tripod, but at night you have the advantage of the lower density of tourists around the Pantheon, so you can select the exact angle where you wish to place a tripod to get longer exposure times and make pretty much any necessary adjustments without any rush. 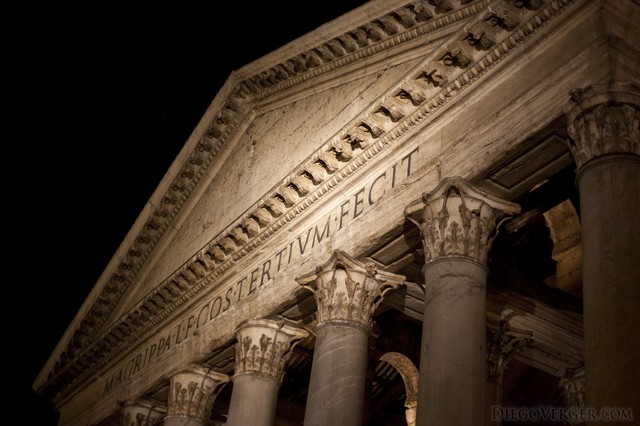 North façade of the Colosseum, with its characteristic outer arches. Between each arch there are three different types of columns at each level: Doric columns on the lower level, Ionic columns in the middle, and Corinthian columns at the top level. In the background on the right you can see the Arch of Constantine.

This sculpture known as Madonna del Sasso is placed over Raphael’s tomb (Raffaello Sanzio da Urbino) in the Pantheon. It was sculpted by Lorenzzeto, a student of Raphael.

This is a view of piazza del Colosseo ("Colosseum square") including the Arch of Constantine. In is angle you can see the abrupt ending of the arches in the front façade. With the help of some reconstructions after suffering fires and earthquakes, the Colosseum has endured for centuries. But the great earthquake of 1349 caused serious damage to the external façade of the southern part, which could not be rebuilt, and the materials from the wreckage were used for other buildings throughout the city. 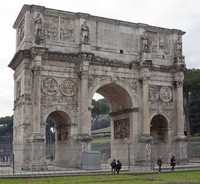 This imposing triumphal arch, the Arch of Constantine, was completed in 315 AD, to celebrate the victory of emperor Constantine against the considerably superior forces of Maxentius 3 years earlier, and, as a result, managing to take control of the city. This battle had a historic significance for Christians beyond the creation of an ornamental monument, since Constantine considered that he had been helped by the "Christian God" to achieve this unexpected victory, so, even before finalizing his arch, he ended the persecution of Christians.

Dome of the Pantheon

Detail of an interior section of the dome of the Pantheon at night.

East side of the Arch of Constantine

In this side view of the Arch of Constantine you can see a circular relief with a figure riding a chariot drawn by four horses (quadriga) together with some celestial being in the heavens, and the relief below represents Constantine’s triumphal entry in Rome. The eight columns of this arch are Corinthian, like the one in this picture.

Corner of the Arch of Constantine

Detail of a corner of the Arch of Constantine in Rome, Italy In this section of the Arch of Constantine, you can see some of the reliefs depicting scenes from Constantine giving a speech to his soldiers before the battle, and the frieze in the upper right is a scene depicting the slaughter of animals (a bull, a sheep and a pig) on the battlefield, a horrendous custom that unfortunately still persists today in our world under other pretexts. The inscription "SIC XX" refers to the desire for the emperor to reign for 20 years; and in other parts of the arch the inscriptions indicate the number X, in reference to the 10 years of Constantine’s reign as Roman emperor at the time of building the arch.

Column bases of the Arch of Constantine

The bases of the Corinthian columns on the south side of the Arch of Constantine display reliefs representing the triumphant soldiers and some prisoners from the battle. The angle of the photo does not allow appreciating the details but on the front side of the nearest base the prisoners kneel to the winged goddess Victoria.

South facade of the Arch of Constantine

On the south facade of the Arch of Constantine there is a dedication inscription to the emperor for liberating the city from Maxentius, various reliefs representing Constantine in scenes before and after the battle, and there are also representations of other emperors such as Trajan, Hadrian and Marcus Aurelius, relating Constantine to these previous emperors with positively regarded qualities.

Aerial view of the Arch of Constantine

This view provides a better idea of the colossal size of the Arch of Constantine in Piazza del Colosseo. It is 69 feet (21 meters) high, 85 feet (26 meters) wide, and 25 feet (8 meters) deep.

Detail of the north face of the Arch of Constantine

On this part of the north face we can see scenes depicting the military and religious roles of Constantine, the Corinthian columns, and the relief inside the central arch. The inscription on the central arch "FUNDATORI QVIETIS" means "Founder of peace". This passageway is approximately 38 feet (11.5 meters) high.

Top of the Arch of Constantine

Partial view of the north side of the Arch of Constantine, and to the right of the photo, the church of San Bonaventura al Palatino on the Palatine Hill.

The hypogeum’s underground tunnels were used to hold and move gladiators, slaves, criminals, Christians and animals from cells or containment places to the arena, in a true maze. On some of the walls you can see various stages or layers of remodeling over time, either due to improvements or reconstruction after fires that the Colosseum suffered.

Hypogeum in the Roman Colosseum

The hypogeum of the Colosseum was a rather complex multi-level structure, consisting not only of tunnels and passageways for transportation and holding of people and animals, but also elevating mechanisms, ramps and mobile platforms. Initially the connection between the arena and the hypogeum has to be waterproof, since the arena used to be filled with water to simulate naval battles. Due to the lack of practicality, and the availability of this type of show in other places it was interrupted in the Coliseum, but this capacity provides an idea of the complexity of the hypogeum and its connecting structures in ancient times, despite its seemingly simple and deteriorated current state.

Many of these slits along the lower corridors of the Colosseum used to be covered by stairs and stands, which at this level were known as maenianum primum, for upper-class citizens, and on the right hand of the picture you have a partial glimpse of the boxes were the senators would have seated. Nowadays most of these spaces under the ancient stairs contain the remains of ornaments, columns, and plaques featuring the various personalities that used to attend the Colosseum.

Inner side of the Colosseum’s exterior wall

Before their collapse, the steps and stands surrounded the Colosseum covering almost the entire exterior wall in this picture, and allowed accommodating 50,000 spectators. The different social classes were assigned to different levels or maenianum ("balconies").

Gladiators relief in the Colosseum

One of the reliefs that used to decorate the Colosseum representing the gladiators in epic poses. The remains of artworks like this one can be found exposed along most corridors of the Colosseum. 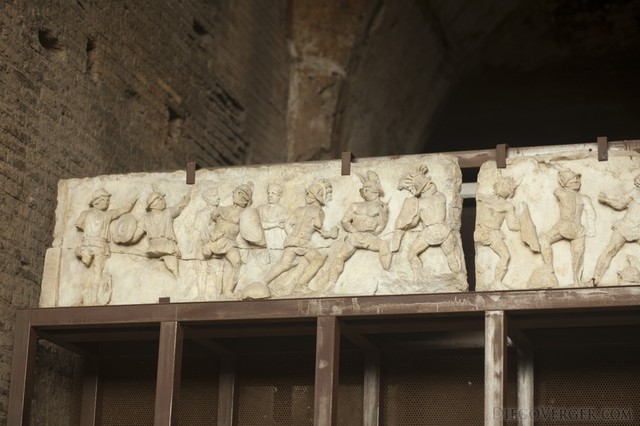 Central area of the hypogeum

The central area of the hypogeum looks like a labyrinth, with several tunnels and mechanisms.

Levels of the hypogeum in the Colosseum

In this photo you can see the different levels of the underground structures that used to be below the Colosseum arena, known as hypogeum. In one of the corridors you can see a structure with a rectangular hole at ground level, probably a drainage outlet, which would have been used in connection with a complex water and sewage system that ran below these underground levels.

Ornamental busts of the Colosseum 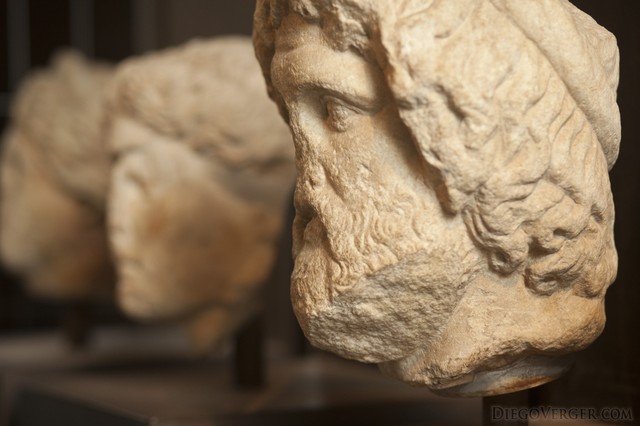 These are some busts that used to decorate the Colosseum, representing various important personalities of the time. They are now exposed in different corridors and chambers of the Colosseum along with other ornamental pieces. Despite their deterioration, you can appreciate the care with which these sculptures were created, with hair and creases worked in considerable detail.

Detail of the arches of the outer wall of the Colosseum

The holes in the walls of the Colosseum are not due to decay but to the fact that approximately in the VII century AD the population had decreased significantly, and the city reached an unbearable degree of poverty, so the extraction of valuable materials out of inactive structures was allowed, and most metal beams that had been used to provide a framework for the construction of the Colosseum were removed.

Detail of the dome of the Pantheon