Loggias of the Tower of Pisa 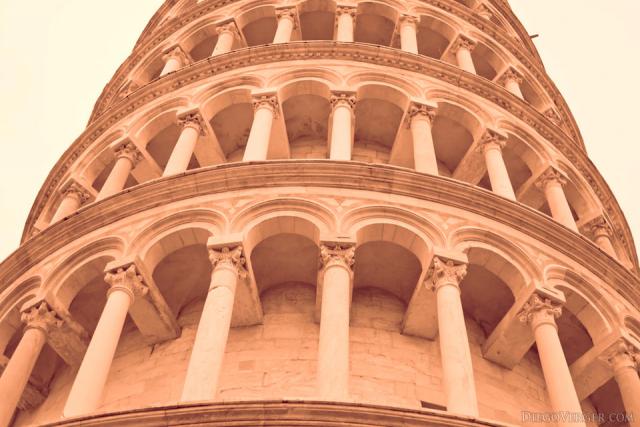 Detail of the arches and columns on the lower loggias of the Tower of Pisa. 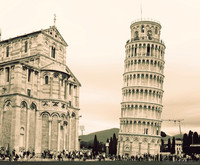 The height of the Tower of Pisa from its foundation is 58.3 meters, or 100 Florentine arms ("braccio fiorentino"), or also Pisan arms ("braccio pisano"), an ancient measurement unit frequently used in the Republic of Pisa, which is equivalent to 58.3 centimeters (23 inches). Due to its tilt, its height above the ground varies approximately 80 centimeters (31 inches) between the highest and lowest side.

The Baptistery, Cathedral and Tower of Pisa in infrared 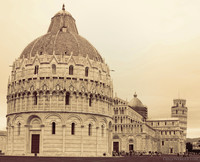 The Pisa Cathedral and the Tower of Pisa in infrared

The Putti Fountain in front of the Tower of Pisa

This gate, located on the west side of Piazza dei Miracoli, is part of Pisa’s medieval wall, and was commissioned by Cosimo I de’ Medici in 1562, whose statue is at Piazza dei Cavalieri (Knights’ Square), and can also be seen in the photo gallery of the City of Pisa.

Detail of Porta Nuova in the Pisa wall

A street corresponding to the Sant’Antonio quarter, which borders the Arno River on the south.

The medieval wall of Pisa in infrared

A street in the Santa Maria quarter of Pisa

South side of the Tower of Pisa

The 6 loggias of the tower have 30 columns each.

Campano Tower in the center of Pisa

This is a medieval tower located in Via Calvalca. It is also known as Torre dei Caciaioli ("Tower of the Cheese Mongers"), probably because, since medieval times, the ground level of many of the buildings in the area used to be rented to merchants for storage of goods.

The Arno across Pisa 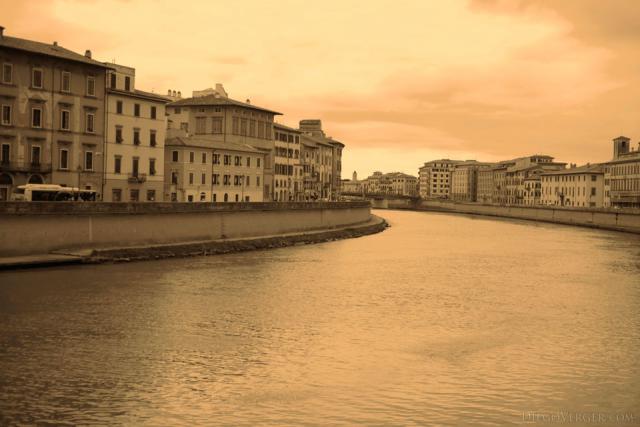 A street of Pisa in infrared 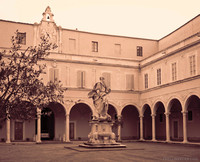 As mentioned in the gallery of the City of Pisa, the white geometric shapes on the windows of buildings along the Arno are part of the preparations for the "Luminara di San Ranieri", a traditional celebration of Pisa began centuries ago by Cosimo III de’ Medici, in which the buildings and historic monuments are specially lighted for a night.

Façade of the church of Santa Maria della Spina in infrared 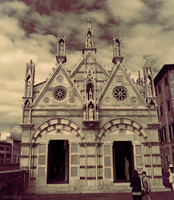 Back façade of Santa Maria della Spina in infrared 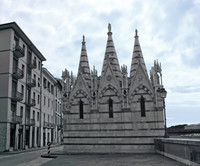 Detail of the gables, arches and statues in the niches of this romanesque-gothic church.

Ceiling of the church of Santa Maria della Spina

A building in Vittorio Emanuele II Square in infrared

The "Ponte di Mezzo" (Central bridge of Pisa), reconstructed after the Second World War, is located in the intersection of the 4 historic quarters of Pisa: Santa Maria and San Francesco to the north of the Arno, and Sant’Antonio and San Martino to the south.

Palazzo Pretorio and the Clock Tower

Church began in 1569. Located in Piazza dei Cavalieri (Knights’ Square). The bell tower of the church, dating from 1572, stands out behind its façade.

A gate of the Stampace bastion

This bastion was part of Pisa’s wall and is located in its southwest end. 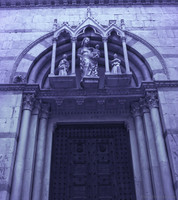 This is a building dating from the 15th century in Borgo Stretto street, built over an arcade.

In the center of the picture is the Clock Tower of Palazzo Pretorio in Piazza dell’Orologio. On the left, a partial view of the Ponte di Mezzo. 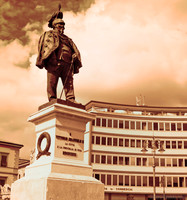 Statue of Vittorio Emanuele II, first king of unified Italy, in the homonymous square of Pisa. In the background, the building of the Chamber of Commerce of Pisa.

Church of San Sisto of Pisa

Church consecrated in the 12th century near Piazza dei Cavalieri.

Detail of the church of San Sisto of Pisa

The cross on top is the Pisan cross, which consists of 4 arms and 3 spheres on each arm.

Tower of the church of San Sisto

Façade of the Clock Palace at Knights' Square 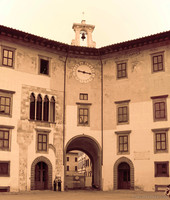 This is Palazzo dell’Orologio of 1607, in Piazza dei Cavalieri, which included in its structure a medieval tower, the "Torre della Fame" (Tower of Hunger). 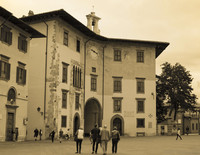 The church of Santa Cristina on the bank of the Arno 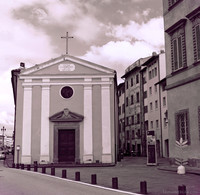 A church rebuilt in 1118, after a previous structure was destroyed by floods, whose neoclassical aspect is due to its restoration in 1816. It is located next to the Palazzo Blu.

The baptistery next to the Pisa Cathedral 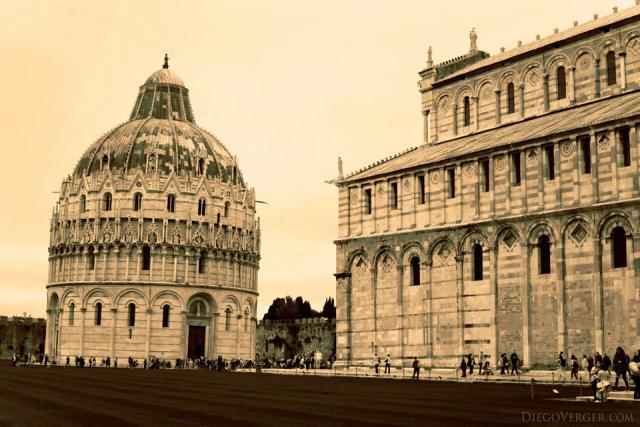 Bulding to the east of Piazza dei Miracoli.

Bike in a street of the Santa Maria quarter - Infrared version

Buildings in the center of Pisa

The Tower of Pisa through the medieval wall

The Tower of Pisa as seen through a secondary door of the medieval wall next to Porta Nuova.

The medieval wall of the ancient Republic of Pisa - Infrared version

Detail of the façade of Santo Stefano dei Cavalieri

The Tower of Pisa in infrared

Detail of the blind arcade of the Tower of Pisa

Infrared photo of the arches of the tower at ground level, with Corinthian engaged columns, and inlaid polychrome marble laid out in geometric shapes.

The Baptistery of Pisa in infrared

Park Güell in Barcelona
← Back
﻿
⬆️