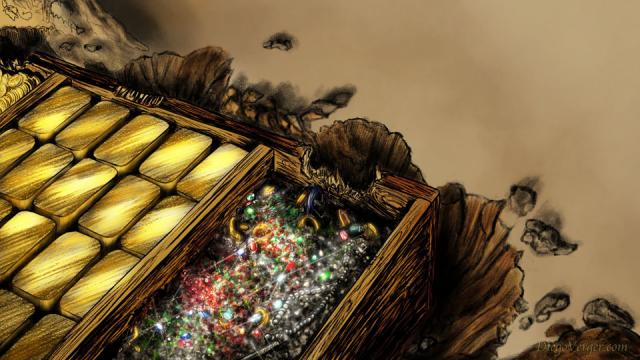 The drawings on each page of the clip "The Count of Monte Cristo: The Secret Cave" were made using Krita and Inkscape. 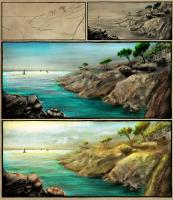 The first panel depicts a view of the Mediterranean Sea from the island of Montecristo, slightly modified to help storytelling.

In order to adjust the text to the irregular image outlines I used Inkscape, which is ideal for graphic design and has a function to adapt text to any geometric shape (Text > Flow into Frame), including irregular and custom shapes. 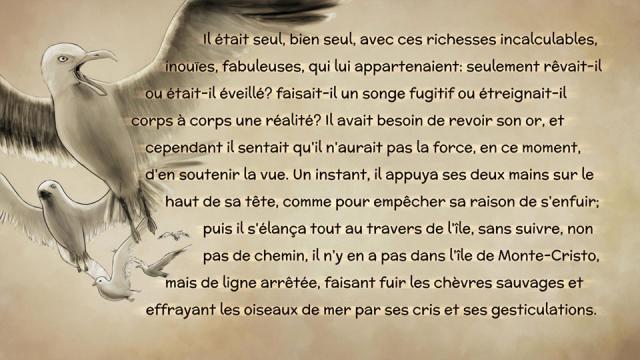 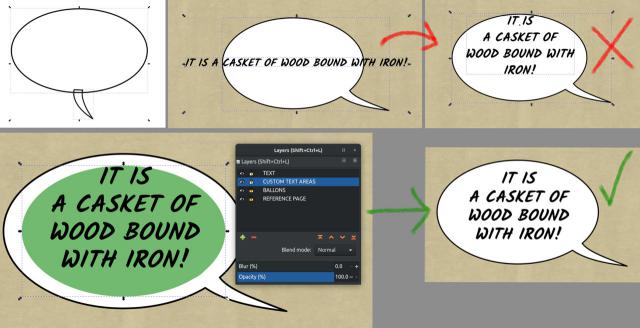 Inkscape was also useful for creating the speech balloon using the "Flow into Frame" function. But when flowing the text directly into the balloon, there is no option yet to set a text margin. One possible solution is to add an intermediate shape to define the text area, as shown in the image.

Another useful tool for creating speech balloons is Tweak, which when switched to Push or Shrink/Grow mode allows you to change the shape of the balloon more intuitively without having to adjust individual vectors. 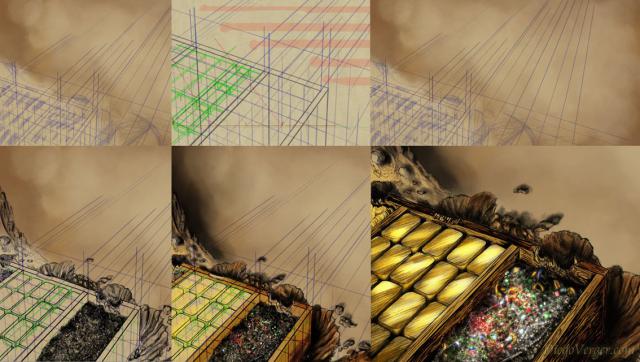 Krita's perspective tools were useful to establish the position and relationships of certain objects in space, and even of the character. 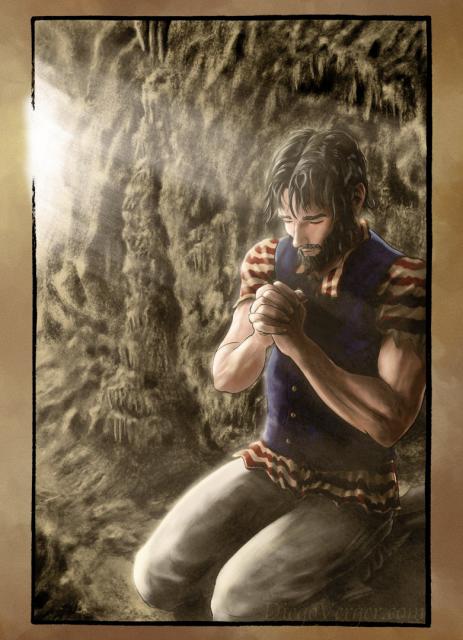 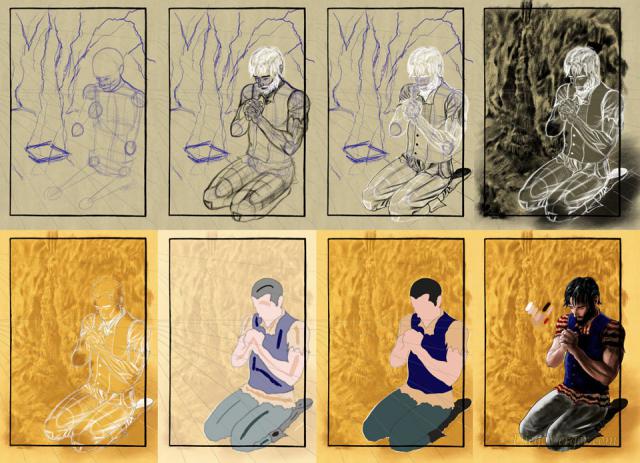 A practical and quick way to establish a flat color layer is Krita's Colorize Mask. Before making the strokes for the mask, as in the second, lower, image, I delimited the borders with a non anti-aliased brush (from the Pixel Art group in Krita), so as to establish accurate limits and to facilitate processing of the Colorize Mask, and any eventual selections. 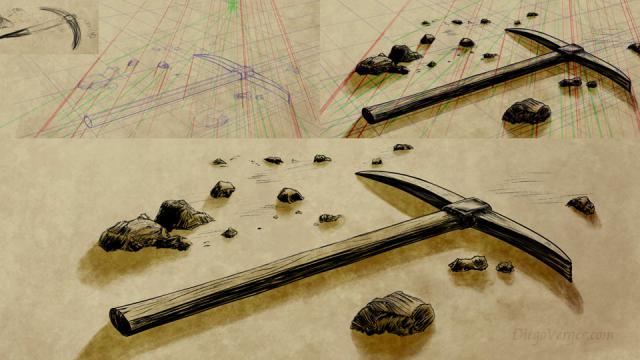 For the cast shadows on the pickaxe and stones I used two additional vanishing points, one for the projection of the shadow on the ground, and another for the intersection with the light beam.

This panel deviates slightly from the novel of Alexandre Dumas and Auguste Maquet. In the story, Edmond Dantès had actually had his long beard trimmed before landing on the island of Montecristo to search for the treasure; but visually, I kept a short beard as a vestige of his imprisoned years at the Château d'If, which increases the contrast of the character before assuming his new identity as the Count of Monte Cristo. 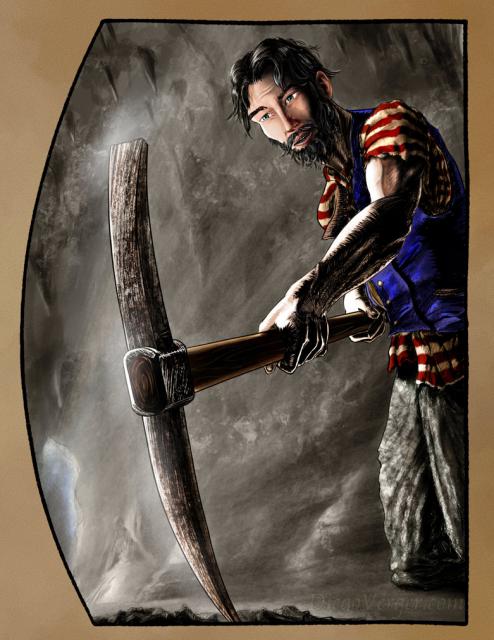 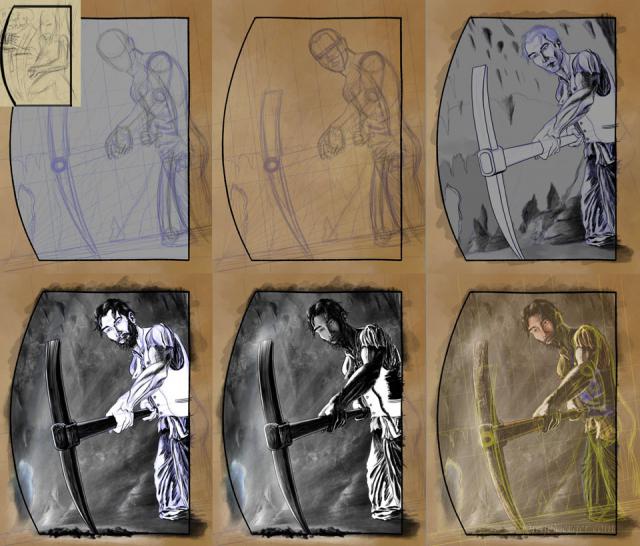 When creating the designs of the coffer's lock and padlock, Krita's Horizontal Mirror Tool and the concentric ellipse of the Assistant Tool were great time savers.

Even in a simple drawing like the gold bars, the possibility of placing vanishing points extremely far from the page is one of the main advantages of working digitally in two-point perspective.

The chest on the top right corner was drawn using the new charcoal bundle.

In this panel I used the Charcoal KA bundle. These charcoals allow a wide range of effects and textures very similar to those achieved when drawing with traditional charcoals.

For this image I used various filters available in the G'MIC-QT plugin until the effect I was looking for was achieved. In this case the Aurora, Depth of Field, Radial DOF, and Bokeh filters were useful.

The audiobook clip is also available in Spanish, French and Italian here.

The Count of Monte Cristo - Gold and jewels chest

The Count of Monte Cristo - Gold chest, perspective in Krita

The Count of Monte Cristo - Edmond praying in the cave