Mummy case of the Lady of the House with the inscription “Dyed-Montu-iues-anj” (Montu said: long may she live!), created sometime between 945 and 715 BC. This date correlates with the age when these mummy cases began to be made of linen or papyrus and plaster (Egyptian cartonnage), instead of wood, and artisans painted elaborate details about the life of the deceased person on them. At the bottom there is part of a depiction, apparently of the god Horus, which continues into the next photo carrying the shen rings of eternal protection.

Detail of the central part of the cartonnage corresponding to the Lady of the House “Dyed-Montu-iues-anj”. In the center there is a depiction, which could correspond to the sun god Ra, with a falcon head and a red sun disk above its head. You can also see on the side of the cartonnage, a character with a red crown, known in Egyptology as “deshret,” representing Lower Egypt, or the northern region of Egypt, which corresponds to the Nile Delta. 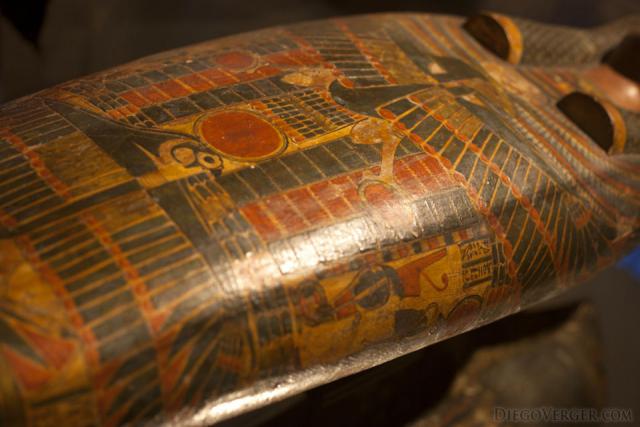 Reconstruction of Iny’s funeral chapel. The Egyptian Museum of Barcelona has managed to recover several fragments of this chapel and complete the hieroglyphs of the missing fragments, after 20 years of research and retrieval efforts.

Bas-relief of a scene with the goddess Nephthys on the left and the goddess Isis on the right. Above the body, a flying character, which seems to correspond to Horus, carries the shen ring (Shenu). Under the body, there are canopic jars. 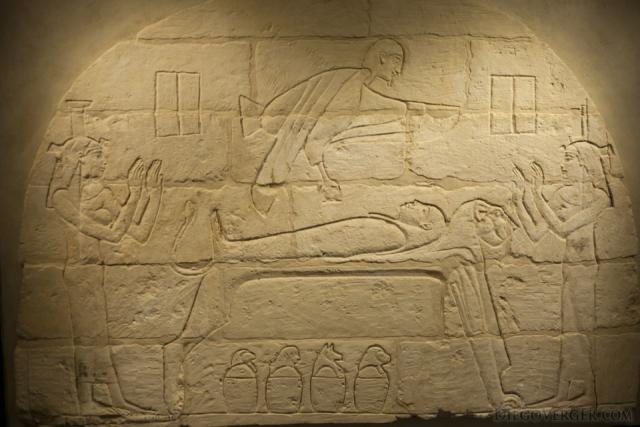 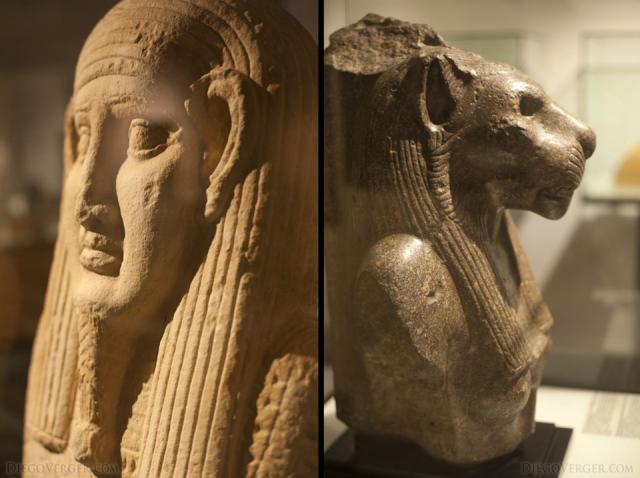 On the right, a statue with the head of a lioness, possibly corresponding to the goddess Tefnut or the goddess Sekhmet. On the left, the sculpture of a Pharaoh.

A wooden canopic chest from 302-30 BC, used to hold canopic jars containing internal organs, with a depiction of the god Anubis with other characters, and below, several Djed pillars, symbols of stability.

This is one of the several limestone block statues this museum has. Its estimated date is from 1307 to 1196 BC. The head of these block or cube statues is usually very detailed, and the sides or front of the block contain various inscriptions about the life of the person, in this case a dedication by the children of the deceased, Iny and Huy. As to photography, although I only included this photo to share this material and analyze it, the artifact on the glass can usually be reduced or even avoided, if you want, by using a polarizing filter on SLR cameras, when you can’t find a better angle without glass reflections.

These funerary monuments were frequent for several centuries in the Egyptian culture; in fact, it is estimated that they were implemented for approximately 2000 years. Throughout various dynasties, some modifications in their content were introduced, but the inscriptions in these cubes usually included a story about the person. 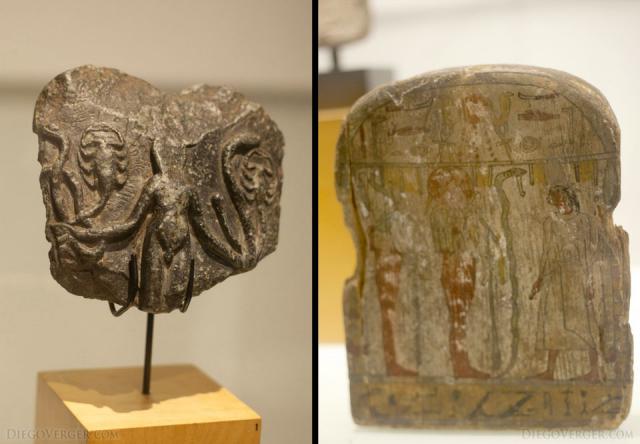 On the left, a stele of a character holding snakes in both hands, and surrounded by scorpions, which would correspond to the god Horus depicted as a child. The piece on the right-hand side photo shows a snake with a beard and standing up, which could correspond to the serpent god Nehebkau.

A golden sarcophagus with hieroglyphics, and inside the second glass cabinet in the background you can see x-ray plates, lying beneath the mummy, partially visible in the picture. The museum conducted a radiographic study of this mummy, without disturbing the piece, in which it was determined that the individual was a woman, embalmed with various objects.

This museum has an entire section of stone statues, and some bronze ones, cubic or block statues such as the ones shown before, as well as busts corresponding to different Egyptian dynasties. 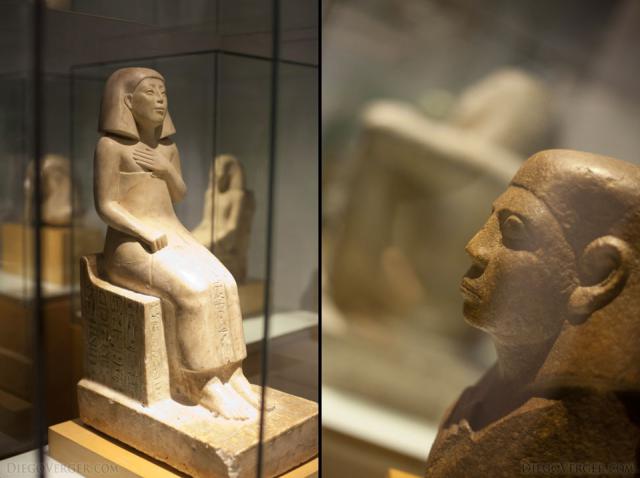 A small statue of a person grinding grain with a hand mill.

Small Egyptian obelisk with hieroglyphics, carved from a single block of stone as it was customary. 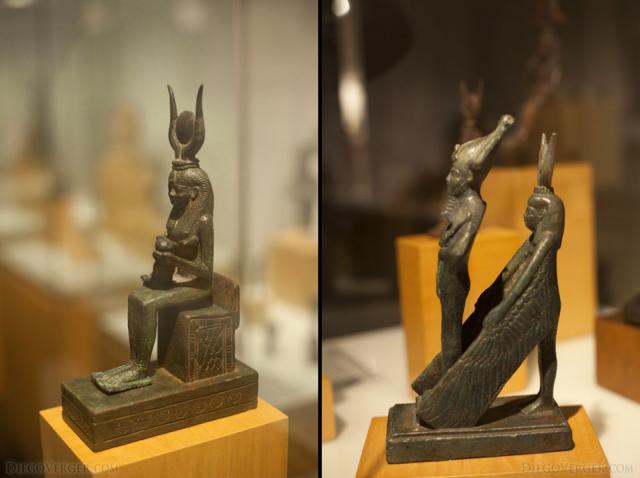 Sculpture of a baboon

A life-size stone sculpture of a baboon. The other side of this sculpture (the left side of the baboon) was broken, and the top of sculpture also seems to be missing its original structure, so in this case it might be a depiction of the god Djehuty (or Thoth), a deity that is sometimes represented as a baboon with a lunar disk on top of his head, or it could also be the god Babi or Baba.

On the left, the crown of an Egyptian ceremonial staff made of bronze, with a depiction of the god Bes (715-332 BC). On the right, a metallic sistrum or “sechechet,” used as a musical instrument in sacred ceremonies and rituals.

Ceremonial staff with a rowboat

Another ceremonial piece made of metal that represents an Egyptian rowboat.

Mummy of a crocodile

Animals always played a key role in ancient Egypt, either by representing various gods, in hieroglyphic writing, or even as pets, whose treatment by their owner was an important factor in the afterlife. Animal mummification was therefore common, including pets such as cats, dogs, birds and baboons, but also crocodiles, such as the one on this picture.

The Egyptian Museum of Barcelona has a full section of ornaments, amulets and jewelry of different materials and colors, with gold and lapis lazuli standing out. The pieces are quite varied and detailed, with different representations; in this case, a beetle with outspread wings.

Statue of the god Hapi, usually related to the fertility of the Nile, depicted wearing plants from the Nile on his head (304-30 BC).

A painted sarcophagus figurine; on the right, a bronze statuette of the god Osiris, holding a crook (Heka) and a flail (Nekhakha).