Panoramic view of Barcelona from "Parc del Carmel" (Carmel Park) next to Park Güell. The Agbar tower stands out on the left with its elliptical shape, and you can see the Basilica of the Sagrada Familia (Sacred Family) on the right, with the always active cranes around it. 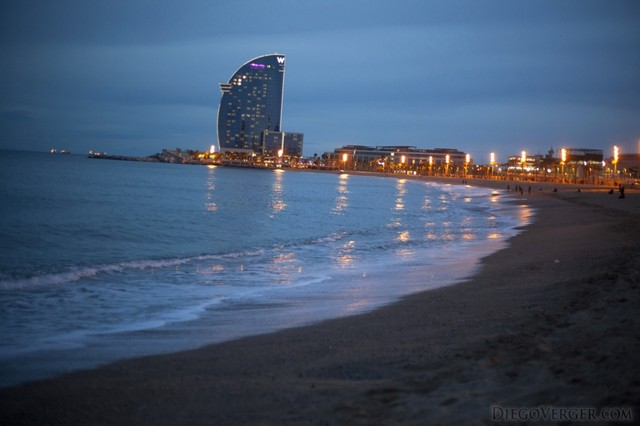 Barcelona has over 2.5 miles of beaches, all accessible to individuals with mobility impairments. There is a wide range of services available and activities to do, including surfing, and there are parallel paths that allow you to stroll, skate, or ride bikes and small motorized vehicles along the entire coastline.

A sunset seen from the Montjuïc mountain, to the west of the Montjuïc viewpoint. The area seen corresponds to the Pedrosa industrial estate in L’Hospitalet de Llobregat.

View of the huge port of Barcelona from the Montjuïc mountain.

The magic fountain of Montjuic in Josep Puig i Cadafalch square, very close to the "Museu Nacional d’Art de Catalunya" (National Art Museum of Catalonia). This fountain is artificially illuminated at night, but during the day, the Sun also produces interesting refractive effects with the sprinkled water for photography. 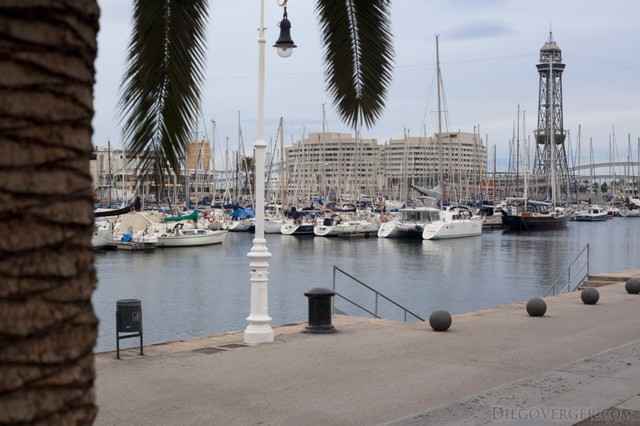 Partial view of the national inner harbor of Barcelona as seen from the promenade Moll de la Fusta (or Moll de Bosch i Alsina).

The stairs of this promenade are flanked by some artistic waterfalls that create a suitable environment close to the Art Museum of Catalonia. They were designed by the French landscape architect Jean-Claude Nicolas Forestier. 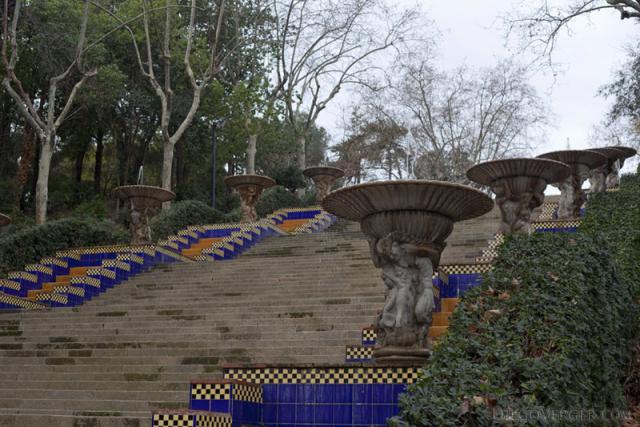 In this panoramic view of Barcelona, from the ascent to the National Art Museum of Catalonia, the four ionic columns by the architect Josep Puig i Cadafalch stand out. Behind them, in the center of the photo, the cylindrical building corresponds to the Arenas de Barcelona in "Plaça d’Espanya" (Spain Square), which used to be a bullring until 1977, but fortunately this horrible and savage practice was replaced by a shopping center.

On the right stands the funicular tower that connects "Plaça de l’Armada" (Armada square) with the business complex World Trade Center Barcelona, which is the building on the middle right side of the picture. In the center of the photo, the shopping mall Maremagnum. Behind Maremagnum, there’s a little square, Plaça de l’Odissea, and a short street where there are usually artists painting and selling their paintings, as they do in the Ramblas, some of which are very talented.

A daytime view of the same sector. The buildings behind Maremagnum correspond to the Barceloneta quarter, which has direct access to the beach of Barcelona.

These tiered garden ponds are often surrounded by flowers. 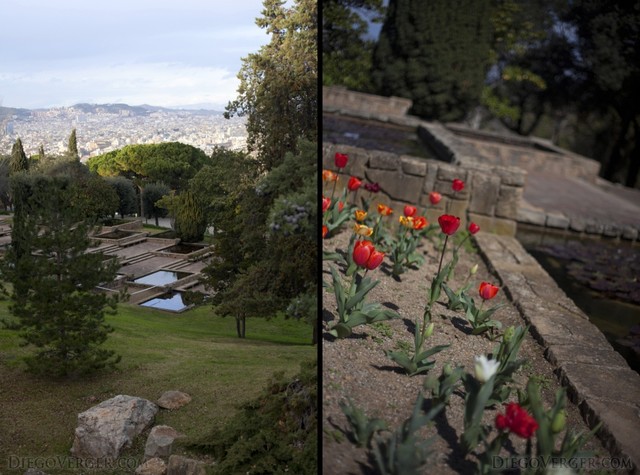 I took the photo on the left in a month of February so there are no flowers, but in the right you can see the flowers that usually decorate this original garden most of the year.

Aquatic plants in the ponds of the Mossèn Cinto Verdaguer garden. 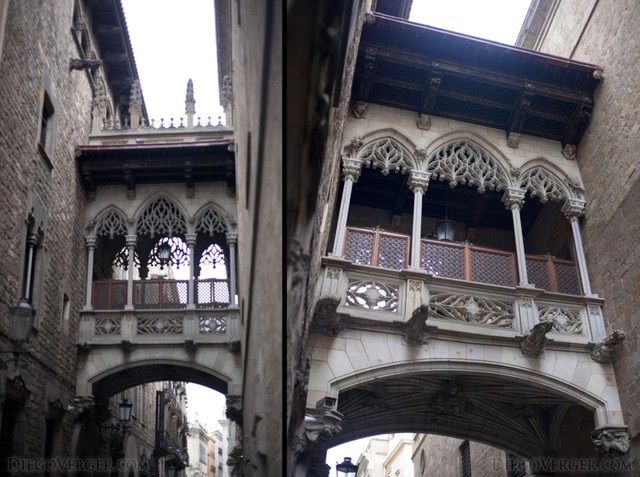 Chandeliers and vaulted ceilings of the Barcelona Cathedral or "Catedral de la Santa Creu i Santa Eulalia" (Holy Cross and Saint Eulalia). You can see the ogival arch, or pointed arch, and the quadripartite ribbed vaults, which are characteristic elements of the classic Gothic style. Many of these piers and arcades are reminiscent of the Notre Dame Cathedral in Paris, which was completed 85 years before this one, but during the same stylistic period.

Here you can see some composite piers, as well as the pointed arches and the quadripartite vaults, very frequent in the beginnings of the Gothic style period. This cathedral was begun in 1298 and was completed in 1430, and is actually the third cathedral built in the same place. The former cathedral, built in the middle of the XI century was Romanesque, and even before there was a Christian basilica built in the VI century.

The "Museu Maritim" (Maritime Museum) of Barcelona has a collection of ships spanning across centuries, navigation instruments, and also a restoration workshop where you can see work in progress. This is one of the most featured pieces of this museum, a replica of the royal galley used in the battle of Lepanto in 1571.

Detail of the royal galley

Detail of Juan of Austria’s royal galley. This is a replica made in the 70’s. The original was built in Barcelona in 1568.

The Castellers performing in plaça Sant Jaume, creating a human tower with incredible skill and professionalism, in this traditional event of the Catalan culture.

The giants of Barcelona in Sant Jaume square. The dance of "Els Gegants" (the giants) is another of the most famous Catalan traditions in Barcelona, in which various personalities related to the history of Catalonia are presented in a very original way.

Casa Milà, a cultural center better known as “La Pedrera”, was designed by the Catalan architect Antoni Gaudí, whose works are featured throughout the city, including Park Güell, which is included in another gallery.

A long exposure view of the traffic in Ronda Litoral, going through the promenade Moll de la Fusta, and behind, the massive column corresponding to the Columbus monument at the end of the Ramblas, which is also a 360-degree viewpoint.

Side door of the Generalitat de Catalunya, a government institution, in carrer del Bisbe ("Bishop Street"), which used to be its main door.

View of Barcelona from Parc del Carmel next to Park Güell.

Another view of the port of Barcelona at dusk.

The building that stands out in the center, over the outline of the hill, corresponds to the Temple of the Sacred Heart of Jesus on mount Tibidabo.

The Armada square in the Miramar esplanade of the Montjuïc, in front of the Miramar hotel.

Long exposure photo of Ronda Litoral along Moll de la Fusta, next to the National Dock. 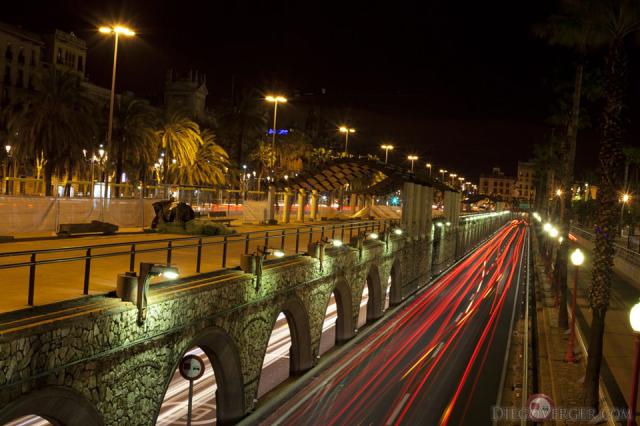 Port of Barcelona from Montjuic

View of the port of Barcelona from Montjuic, with some of the many cruise ships that visit it daily.

Port of Barcelona at night

The northeast sector of the always active port of Barcelona with its endless containers and some cargo ships in the Mediterranean. 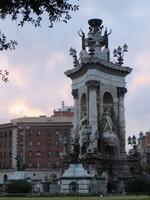 The fountain of "Plaça d’Espanya" (Plaza of Spain) designed by Josep Maria Jujol, was built for the Universal Exhibition of 1929.

Exterior wall of Castell de Montjuïc on the Montjuïc mountain. The peripheral walls of this castle were built with a slope to grant the structure greater resistance and defensive capabilities.

View of the sunset in L’Hospitalet de Llobregat, to the southwest of Barcelona, from the Montjuic mountain.

The building at the center of the photo is Barcelona’s Customs. The column on the left is the Columbus monument. Behind the Customs is a platform over the water, the Rambla de Mar, which leads to the shopping mall Maremagnum and the "Reial Club Marítim de Barcelona" (Royal Maritime Club of Barcelona).

This communications tower is located in the center of the Olympic village, and was specially created for the Barcelona 1992 Olympic Games. The tower was also designed to work as a sundial.