Since ancient times Gibraltar has been an area of great significance. Greek mythology considered “the Rock” as one of the Pillars of Hercules that marked the end of the known world, and Plato mentions it as a geographical reference to locate Atlantis in its proximity. The privileged location of the peninsula and its extensive communication by sea, air and land routes bestow Gibraltar a great importance in maritime and other types of trade. Strategically it has always been a key sector in military operations, such as during the second world war, when general Dwight D. Eisenhower used the tunnels of the Rock as headquarters to plan operation Torch, the Allied invasion of North Africa. Nowadays the safety of the Rock is still legendary, and among other purposes, many companies use it as a refuge for their servers containing confidential data. And of course, the stunning panoramic views and the various conveniences and activities offered, especially maritime ones, position Gibraltar as an excellent tourist spot for sea lovers.

This is a photo of Gibraltar’s North District and the Gibraltar International Airport runway. Up to the 1930s, the area currently occupied by the airport used to be a hippodrome. The extension of the runway was built over stones that were extracted from the very Rock of Gibraltar.

One of the paths on the west side of the Rock that can be explored on foot. A cable car is also available, as well as taxis and buses, that traverse these roads making stops in the different viewpoints along the way. It is not advisable to hike the Rock carrying food because it attracts the attention of the large population of macaques inhabiting the Rock’s Nature Reserve. Winston Churchill always considered important to maintain the population of these apes, asseverating that as long as the macaques remain on the Rock, so will the British. Beyond the interpretation that some might give to these statements, which have occasionally been underestimated as humor or superstition, these monkeys might also work as an effective natural alert system against potential intruders who would decide to go into the forbidden areas of the nature reserve of the Rock.

This is a photo from a viewpoint in the north face of the Rock, next to the entrance of the Great Siege Tunnels. These tunnels are part of a defensive system excavated in the rock, whose construction began in 1782. 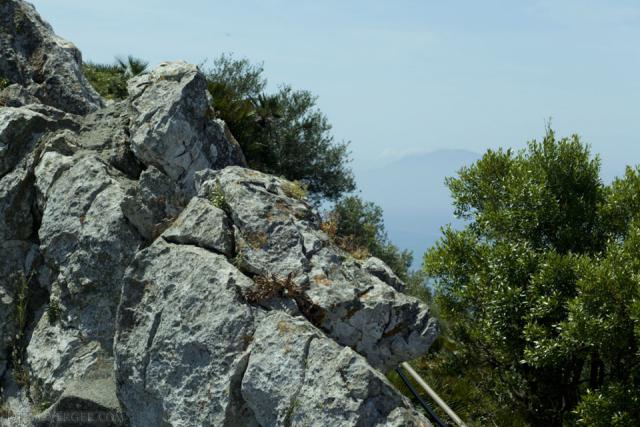 A detail of the Rock and partial view of Mount Jebel Musa in Morocco, on the other side of the Strait of Gibraltar.

Over the horizon, mount Jebel Musa (or “??? ????”) stands out through the haze, in this photo of Morocco as seen from the Rock of Gibraltar. According to the legend, Hercules himself separated Mount Calpe (Gibraltar) and Mount Abila (Jebel Musa or Mount Hacho in Ceuta), that formed an ancient mountain range, opening it to connect the waters of the Mediterranean and the Atlantic Ocean, in front of Atlantis. In subsequent photos you can see a representative monument of the pillars of Hercules which is located at the foot of the Rock of Gibraltar, in a southern viewpoint facing Africa.

A panoramic view that encompasses the Rock of Gibraltar from North to South. The openings in the Rock are part of the tunnels dug inside it. Many of these “windows” have served as ventilation ducts and cannon emplacements, as well as being excellent panoramic viewpoints for surveillance.

Queensway Quay Marina is located next to Gibraltar’s Upper Town, and it stands out by the residential complexes that surround it. This wharf is the oldest in Gibraltar, and used to be the site where newly appointed Governors arrived to the territory from England.

Pillars of Hercules, The Modern World

This is the representative monument of the pillars of Hercules at the foot of the southern end of the Rock. The plaque of the Modern World mentions the current importance of Gibraltar in the following manner: “In Modern Times Gibraltar is famous as an important tourist, trading and financial centre created by the enterprise and initiative of its citizens, with a unique position at the crossroad of land and sea routes where the East meets the West.”

Pillars of Hercules, The Ancient World 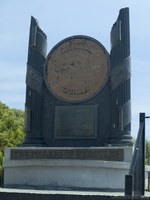 In the east side of this monument, corresponding to the Ancient World, the map represents the territories known to ancient Greece. The plaque reads as follows: “To the Ancient World Gibraltar was known as Mons Calpe, one of the legendary pillars created by Hercules. As a religious shrine and as an entrance to Hades to many, it signified the ’NON PLUS ULTRA’, the end of the then then known world.”

In the center of this photo you can see the Alcaidesa marina, the Spanish town La Línea de la Concepción on the right, and on the bottom right, Gibraltar.

Andalusia from the Rock of Gibraltar

In this photo you can see La Línea de la Concepción, and its beach along the Mediterranean. The mountain on the right corresponds to Sierra Bermeja mountain, located in the Andalusia region in Spain, and part of “Costa del Sol.”

The North District of Gibraltar and two of its wharfs, Ocean Village Marina and Marina Bay, next to the runway of the international airport. This is photo from a viewpoint in Willis Street, near the Moorish Castle on the west side of the Upper Rock. 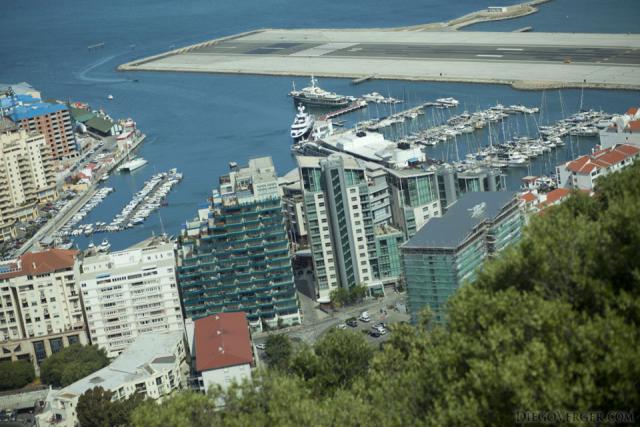