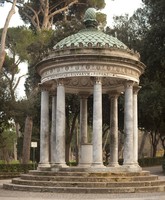 This small temple is located at a crossroads, to the south of Siena square, in Villa Borghese. It was built in 1789, and the altar in the center used to hold a statue of the goddess Diana.

On the roof of this temple there are depictions of various wild animals, since Diana was the goddess of the hunt and had the ability to control and communicate with animals. The location of the temple in the middle of the woods of Villa Borghese is a significant and adequate choice for this goddess, according to mythology.

The streets all around Bucharest square in the west area of Villa Borghese, which corresponds to Pincio hill, are decorated on both sides by busts of various personalities pertaining to the history of Rome and Italy. The marble busts were added mainly throughout the XIX century, and include Michelangelo Buonarroti, Vittoria Colonna, Giacomo Puccini, Alessandro Volta, Giovanni Boccaccio and of course, Dante Alighieri, among others. 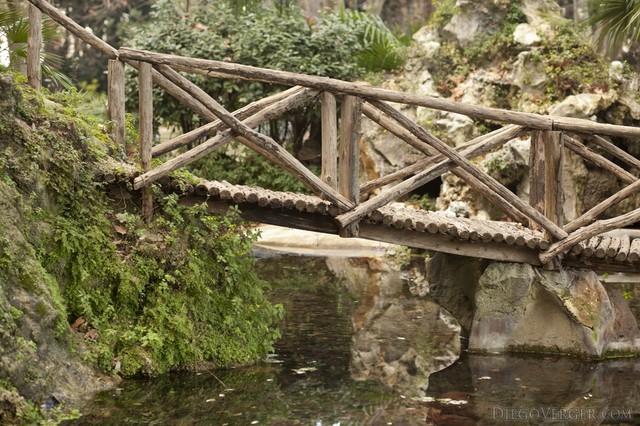 Wooden bridge which is part of the decoration of the small island where the water clock is located in Villa Borghese.

This is the Cestio bridge across the Tiber, connecting the Tiber or Tiberine Island with the west of Rome. The tower that stands out in the background corresponds to the basilica of Santa Maria in Cosmedin, which is the highest medieval bell tower of Rome, and is also where the famous Bocca della Verità ("mouth of truth") is located, which is one of the legends of Rome developed over centuries.

This is a view of Tiber island as seen from the Garibaldi bridge, the Fatebenefratelli hospital in the center, and the Fabricio bridge to the left across the Tiber, connecting with the Lungotevere boulevard.

Sant’Angelo bridge across the Tiber river, leading to the gates of Sant’Angelo castle.

Detail of the bridge of Sant’Angelo including the angel with the cross. The statue of each of the ten angels in this bridge holds some item related to the passion of Christ, as the shroud, the lance, the "INRI" inscription, etc.

This II century castle was commissioned by emperor Hadrian as a mausoleum for him and his family. In 1527 pope Clement VII used it as his own shelter during the sack of Rome by Charles I of Spain, who years later in 1530, would be crowned as Charles V Holy Roman Emperor by the same pope. This castle was also partially used as a luxury prison for the count of Cagliostro in the XVIII century.

This bridge across the Tiber was commissioned by Emperor Hadrian to gain an easier access to his mausoleum, which is now known as Sant’Angelo Castle, from the city center. In even more ancient times it was known as bridge of Saint Peter because it is used by pilgrims to cross the Tiber in direction to St. Peter’s basilica in the Vatican. 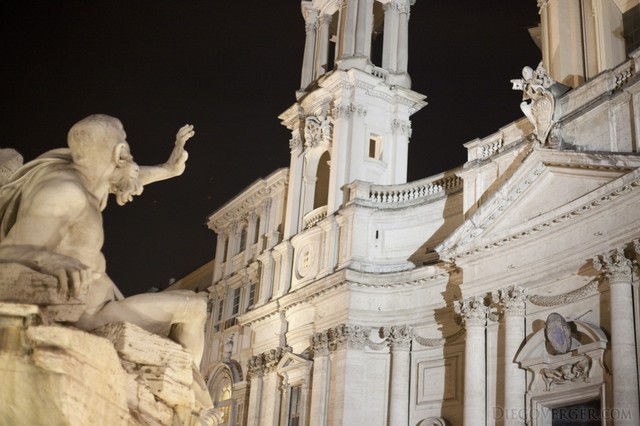 This is the façade of the church of "Sant’Agnese in Agone," in Navona square, or piazza Navona in Italian. It is a Baroque church from the XVII century. "Agone" does not refer to the agony of the martyr this church is dedicated to, Sant’Agnese or St. Agnes, but a medieval term derived from the Greek αγων, which refers to the struggle or competition, since piazza Navona used to be the Domitian stadium, a place used for sports competitions, such as horse racing. The sculpture on the left is part of an impressive main fountain in piazza Navona (the Fountain of the four Rivers).

Vatican coat of arms in the fountain of the four rivers

This is the central part of the fountain of the four rivers ("Fontana dei Quattro Fiumi") in piazza Navona, with the Vatican coat of arms at the base of the Egyptian obelisk along with other symbols. The statues of highly detailed giant men in epic poses surround the structure, with four little waterfalls.

Fountain of the four Rivers and surrounding buildings

One of the giant sculptures in the Fountain of the four Rivers, the central fountain of piazza Navona, and partial view of the façades and bars surrounding the plaza.

Fountain of the Moor

This is another of the fountains of piazza Navona, known as Fontana del Moro ("fountain of the Moor"). This fountain dates from 1653, and was designed by Lorenzo Bernini, and sculpted by his student Giovanni Antonio Mari. The name derives from the facial features of the main character, the man in the center of the fountain, which holds an animal (on the right in this picture). In the center of the photo, playing an instrument, is one of the three hybrid or humanoid beings, which, unlike the moor, are half human half reptilian. In the background you can see the museum of Rome.

This sculpture is an interesting example of contrapposto, where the weight is shifted to one leg, to give a more dynamic and natural posture, and in this case it is well justified by the character’s holding a container, which balances the dynamic stance, and also extends the base of support through the fabric that falls from the container to provide greater resistance to the structure.

Detail of the pillars of the fountain of Cupid

Detail of the pillars of the fountain of Cupid in the central garden of Villa Doria Pamphili. 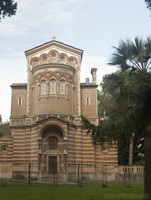 Back side of chapel at Villa Doria Pamphili.

Chapel of Villa Doria, side view

Side view of the Neo-Gothic and Romanesque chapel at Villa Doria Pamphili.

Fountain of the fleur-de-lis at Villa Doria Pamphili. This is the start point of a watercourse which ends in a small lake that partially splits Villa Doria in two sections.

View of the city of Rome

View of the city of Rome in which the dome of the basilica San Carlo al Corso stands out; closer in the foreground you can also see the two towers covered by domes corresponding to the Church of Sant’Atanasio dei Greci, designed by Giacomo della Porta, author of the dome of St. Peter’s Basilica, as well as the fountain of the Moro I show in a photo of Piazza Navona.

Priory of the Knights of Malta

Façade of the building and keyhole of the priory of the Knights of Malta, through which you can see the dome of St. Peter’s Basilica in the Vatican, on the other side of the Tiber river. The square of the Knights of the order of Malta is located south west of the Circus Maximus, and on the way there you can stop by a viewpoint, known as the Giardino degli Aranci ("Orange Garden"), and then continue along Santa Sabina street to find the square.

Music Melody of Lights
← Back
﻿
⬆️