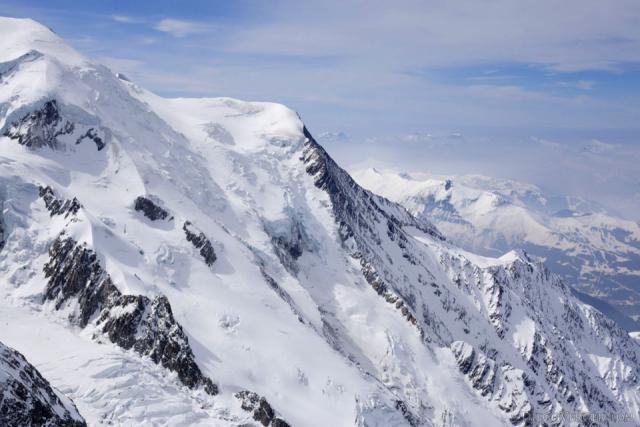 The group of mountains in the Mont Blanc massif known as the Grandes Jorasses, on the French-Italian border. Its highest peak, in the center of the photo, is the Walker peak, and is 4208 meters (13,805 feet) in height. The rest of the peaks, which can be seen somewhat overlapping in the photo, are known as Whymper, Croz, Elena, Margherita and Young. The highest and steepest peak to the right of the Grandes Jorasses is the mountain known as "Dent du Géant" (Giant’s Tooth).

Mountaineers and skiers descending along the ridges towards the glacier. In the background on the right, the Grandes Jorasses; on the left, the mountain known as Aiguille de Leschaux. 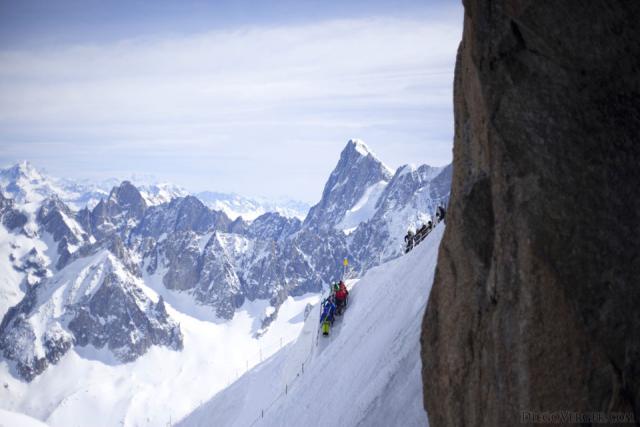 The Aiguille du Dru mountain, 3754 meters (12,316 feet) high, in the northern part of the Mont Blanc massif. To its right, the "Flammes de pierre" (Flames of Rock).

On the right, the highest peak corresponds to the Walker peak of the Grandes Jorasses. On the left, in the central part of the photo is the mountain known as Aiguille de Leschaux, which is shared by Italy and France, covering the territories of Haute-Savoie and Aosta Valley.

An old locomotive exhibited next to the train station in Chamonix which connects with Le Montenvers station, from where you can descend to the glacial valley "Mer de Glace" (Sea of Ice) in the Mont Blanc massif. 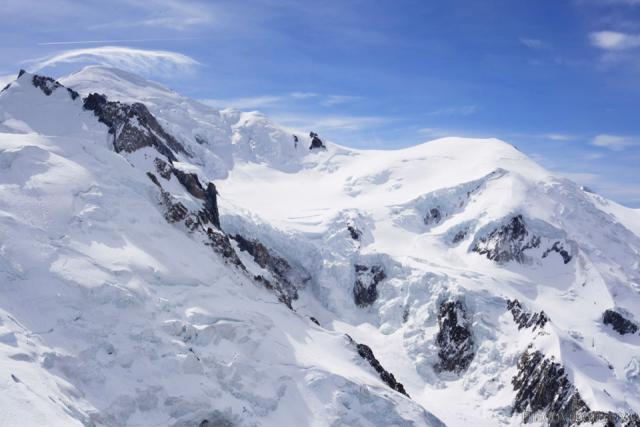 The Ice Cave in the Mer de Glace

Interior view of the ice cave located in the "Mer de Glace" glacial valley of the massif.

Corridor of the Ice Cave in the Mer de Glace

The corridors of the Ice Cave make up a small frozen museum, with photos exhibited on its walls, as well as items related to the exploration history of the Mont Blanc massif.

Sculptures in the Ice Cave

Ice sculptures of the Ice Cave.

Another view of the old locomotive exhibited in front of the station which connects the center of Chamonix with Montenvers. 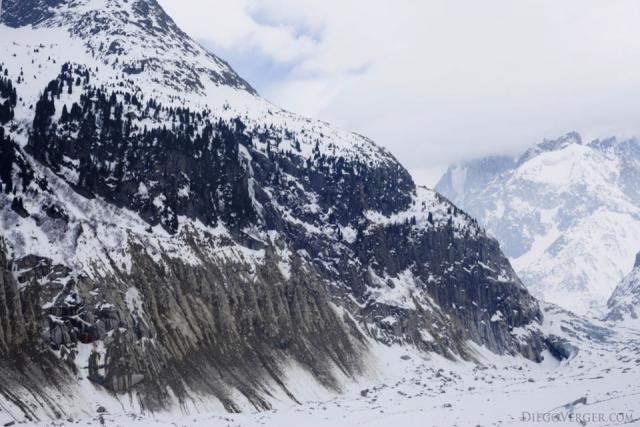 Ice Cave interior next to the Mer de Glace

The grotto in the depths of the Mer de Glace glacier.

The niches on both corridor sides contain items related to mountaineering and the exploration of Mont Blanc.

The Montenvers hotel on the west slope of the Mer de Glace. Above the hotel rises the mountain known as Aiguille de la Tête Plate, on the other side of the Chamonix valley.

Les Houches in the Chamonix valley

On the left, the ski station of Les Houches. On the right, part of Chamonix.