Photo of Lake Como as seen from the city of Como.

The "Tempio Voltiano" is a museum inaugurated in July 1928, which exhibits the devices and tools used by Alessandro Volta during his research, including those related to his most famous invention, the electric battery. 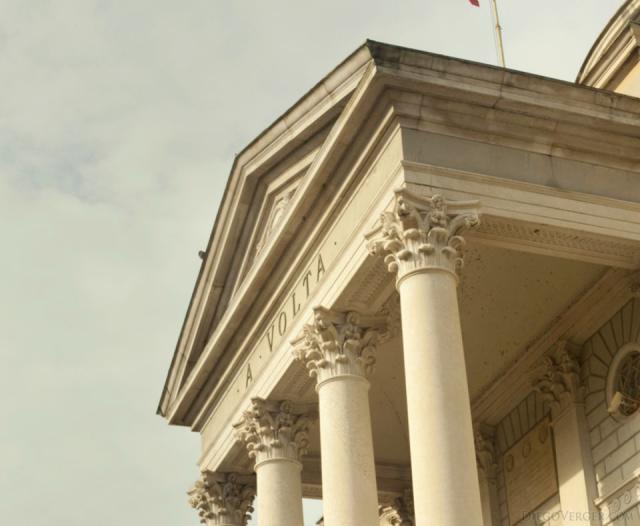 On the shore of Lake Como, and near the Volta Temple, is the Monument to the Fallen in World War I. Inside this tower are the names of the 650 soldiers from Como who died during that war. This work was carried out by the architect Giuseppe Terragni based on the original design by the futurist architect Antonio Sant’Elia, a native of Como. In the photo on the left, the façade reads "La città esalta con le pietre del Carso la gloria dei suoi figli, 1915-1918" (The city exalts with stones from the Carso the glory of its children). In the photo on the right, it reads "Stanotte si dorme a Trieste o in paradiso con gli eroi" (Tonight we shall sleep in Trieste or in paradise with the heroes).

This neoclassical building of the last decade of the 18th century, is a work of Leopoldo Pollack for the marchioness Villani of Milani. It is also known as "La Rotonda", due to its elliptical projection in the façade, and is currently the headquarters of the provincial administration of Como.

The Volta Temple with its characteristic dome, and on the right, the rectangular building corresponds to the Monument to the Fallen.

The city of Como has been related to aviation since the first aeronautical developments. Aero Club Como was founded in 1930, and has become part of aviation history, through decades of education and various activities promoting the use of seaplanes. The club is endowed with a fleet of modern and vintage aircraft, some of which have been used in films, series and documentaries. The classes and excursions are not limited to Lake Como, but also reach Lake Lugano and Lake Maggiore.

One of the most notable buildings in Como is Villa Olmo, a work of the architect Simone Cantoni, which, just as Villa Saporiti, is of neoclassical style. Among the guests lodged in this villa during its ancient operation as a vacation retreat were Napoleon Bonaparte, who visited the villa at the end of the 18th century, and Giuseppe Garibaldi in the 19th century.

In the center, the building of Villa Olmo.

The east shore and hills of Como.

Cypresses surrounding the Monument to the Fallen

This type of conifer has been frequently used since antiquity by the Greeks, Etruscans, Romans and many other peoples for various purposes. From consecration to gods to practical purposes such as windbreaks in high places of worship, or even welcome and information signs during the Roman Empire, these pines have been used in various ways and acquired an extensive meaning. In this case, they probably represent immortality, another meaning historically associated with these trees, as a homage to those fallen during the war.

The market at Cavour square.