The Andalusian city of Malaga, known as the capital of Costa del Sol in Spain, has been a Phoenician city (Malaka) and a Roman city (Malaca), with an always intensive maritime activity, and it holds the ruins, monuments and traces of a long artistic, military and religious history. From left to right in the photo, part of the Malagueta neighborhood and Marina Malaga, the Piers Muelle Uno and Muelle Dos, and the Centre Pompidou Malaga of modern and contemporary art, which is recognized by the huge multicolored crystal cube on the lower part of the picture. In the center of the photo, between the Pier’s restaurants, another more ancient cube stands outs, the Carmen chapel building, dating from 1531. 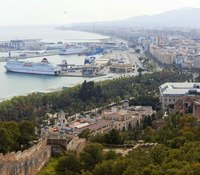 In this picture from Gibralfaro Castle you can see the port of Malaga with the large ships that constantly visit the city from all around the Mediterranean and beyond the Pillars of Hercules. The white undulating band next to the Mediterranean corresponds to the expansion of "Muelle Dos" (Pier Two), and the activities and promenade area known as the "Palmeral de las Sorpresas" (Palm Tree grove of Surprises), with more than 400 palm trees, next to which many ships berth as well. The green zone parallel to the sea is the park of Malaga, and in the lower part of the picture you can see the Malaga Town Hall building with its clock tower.

The Malaga coastline, with the Malagueta beach along the sea promenade Pablo Ruiz Picasso. In the background, the San Anton hill, and on the right, the Pinares de San Anton quarter, part of the East Malaga district. 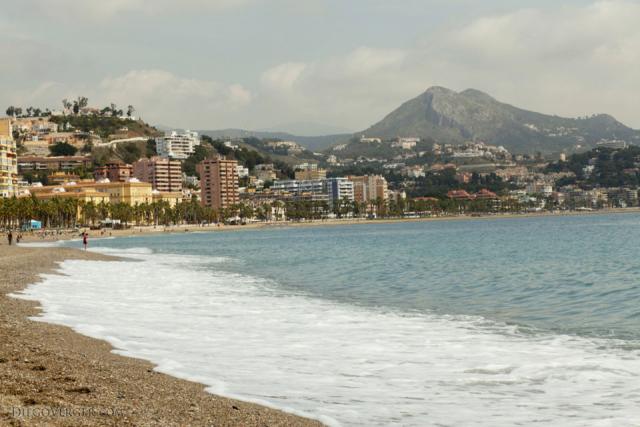 The Cathedral of Malaga as seen from its gardens. The tower on the right is the north one, the highest, with 84 meters (276 feet), which can be seen from the Mediterranean and from all around the city.

This is the beach known as La Malagueta, part of the neighborhood with the same name.

The north wall of the Alcazaba, a citadel of Muslim origin, commissioned in the 11th century (built between 1057 and 1063) by Badis ben Habus, king of Granada, also known as "The Defender".

The Roman Theater, rediscovered in 1951, was built during the 1st century, making use of the slope offered by the hillside of Mount Gibralfaro. In some areas the consolidating material can be clearly seen, which is applied to contribute to the preservation of archaeological materials, and to avoid in this case detachments and cracking of this historical monument.

The statue of the biznagas seller in the Pedro Luis Alonso gardens. Biznagas are a floral arrangement typical of Malaga, composed of jasmines. Behind the statue, on the left, the Malaga Town Hall building, and on the right, the Alcazaba. 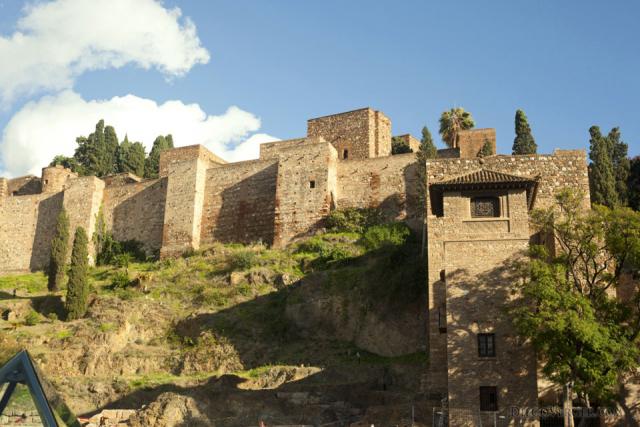 The window of the tower on the right displays geometric designs characteristic of Islamic art, and also features a spire on top with four orbs of decreasing size, like those present in the minarets of Muslim mosques. 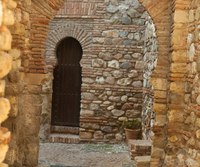 The horseshoe arches in the interior of the Alcazaba keep the harmony of shapes prevalent throughout the ornamental architecture of the citadel.

A water fountain inside the citadel.

The materials used for building the Alcazaba included marble and columns from the ancient Roman Theater, which was readily at hand next to the Alcazaba, on the north hillside of Mount Gibralfaro.

An Arabic vaulted ceiling in the Alcazaba palace

The Alcazaba includes a palace within the fortress, with courtyards, gardens and various rooms such as the one in the photo with a detailed ornamental work, combining various geometric shapes and projecting elements resembling stalactites.

North tower of the Malaga Cathedral

The Cathedral of Malaga is considered an unfinished work, whose construction was interrupted in 1782, and consequently only the north tower of the two planned was completed. This asymmetry produced by the towers has given the Malaga Cathedral the nickname "La Manquita" (The little one-armed lady).

Part of the south wall of Gibralfaro Castle

This fortress was built by the Caliph Abderraman in the 10th century, and later modified by the Sultan of Granada, Yusuf I, in the 14th century. During the reconquest, in 1487, it was besieged and taken by the Catholic monarchs.

Malaga's Farola from the Alcazaba

Beyond the grove belonging to the park of Malaga, the pier continues along the Malagueta neighborhood with various types of restaurants on one side of the promenade, and ships on the other, up to the "Farola", Malaga’s lighthouse from 1817. Beyond the lighthouse is the Marina Malaga.

One of the fortified towers and the wall of Gibralfaro with its view of Malaga, and the nearby hills, extending to the north the districts of Bailén-Miraflores and Palma-Palmilla.

In this photo you can see part of the Center district of Malaga and also the Palma-Palmilla district, among others, including the Malaga soccer stadium, "La Rosaleda", in the neighborhood with the same name.

Malagueta and Port of Malaga

On the left, part of the Malagueta neighborhood, the pier’s promenade and Malaga’s Farola. On top right, the port, and below the characteristic triangular merlons of Gibralfaro Castle.

In this picture you can better see the extension of the Palm Tree Grove of Surprises in Muelle Dos, next to Malaga’s park.

The city of Malaga from the Gibralfaro Castle

The height and age of the cathedral’s tower make it stand out among the other buildings in the picture. Its construction began in 1528.

The trees are part of a little forest inside the Castle of Gibralfaro. A walk along the battlements allows panoramic views of Malaga and the Mediterranean Sea.

In this view of the Malaga Center you can see, on the right, the double wall of the Alcazaba, as well as its towers and gardens, and you can appreciate its elevated position in relation to the modern buildings and the sea level. In the background, the rectangular silver-roofed building corresponds to the Malaga Museum. 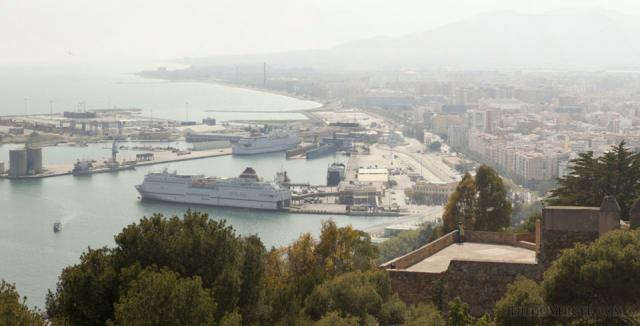 Panoramic photo of Malaga from the Castle of Gibralfaro.

In the center of the picture, the north tower of the Malaga Cathedral. On the left, in the background and through the fog, you can see the outlines of Sierra de Mijas.