Published: June 29, 2017
Also available in:
This museum has extensive collections, including Medieval, Romanesque, Gothic, Renaissance, Baroque and Modern art, photography and numismatics galleries, as well as temporary exhibitions, which widen its offer further.

The National Palace of Montjuic ("Palau Nacional de Montjuïc") is the headquarters of the museum since 1934, although it was built years before for the 1929 Barcelona International Exposition; this is a view from Waterfalls square ("Plaça de les Cascades").

On top left, the National Art Museum of Catalonia. On the right side, the Venetian towers in Plaza España, also built on the occasion of the 1929 Barcelona International Exposition.

Alabaster sculptures made by Damià Forment between 1534 and 1537.

Wooden sculpture from the 15th century. 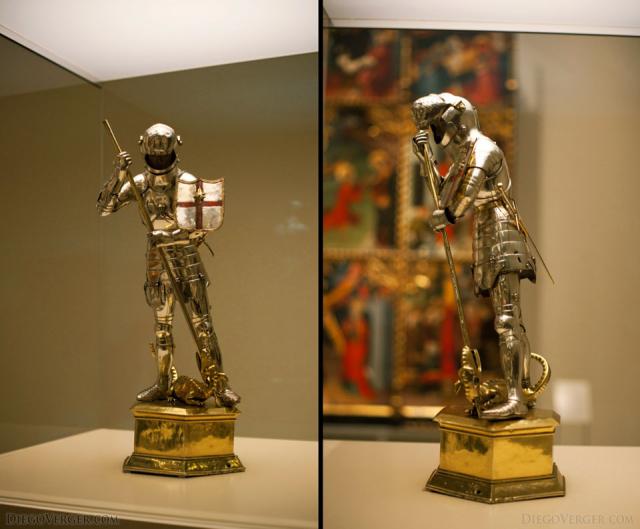 Fifteenth-century goldsmithery work from Saint George chapel of the Government of Catalonia Palace in Barcelona.

A work of terracotta made by Rossend Nobas at the end of the 19th century, which can be found in the Modern Art gallery of the museum. For this type of material, the level of detail achieved in the cloth is remarkable.

A carved wooden bench dating from the 13th or 14th century.

A marble statue from 1928 by Josep Clarà.

With brass ornaments and figures of birds or winged creatures.

Ruins of the Church of the Holy Sepulcher

Oil painting on linen from 1862 made by the Catalan artist Ramon Martí Alsina.

Sculpture made by Miquel Blay in 1902. The contrast effect between marble and bronze intensifies the drama of the scene and the impact of the piece. The museum has some more pieces in this same style in its Modern Art collection.

Alabaster sculpture made by Pere Joan between 1434 and 1445, from the Cathedral of the Savior of Zaragoza.

Marble sculpture made by Enric Clarasó in 1904.

A religious Gothic art piece of 1292, from the Benedictine monastery of Sant Cugat del Vallès.

Capitals from the Camarasa pillar 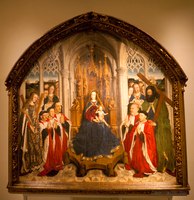 Oil painting on oak made by Lluís Dalmau between 1443 and 1445, from the Barcelona City Hall chapel.

Altarpiece of the Virgin and Saint Anthony the Abbot

Sculpture from the late 14th century proceeding from the church of the Savior of Gerb, in the province of Lleida.

Original medieval Romanesque fresco from the church of Sant Climent de Taüll, in the province of Lleida, transferred to linen, and made in approximately the year 1123. 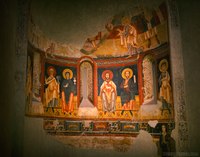 Another Catalan Romanesque mural painting, made between 1080 and 1090, in this case from the central apse of the monastery of Saint Peter of Burgal.

Ruins of the Palace

A landscape oil painting on linen by Ramon Martí Alsina, from 1859.

A marble sculpture from 1884 made by Rossend Nobas, which can be found in the Modern Art section. 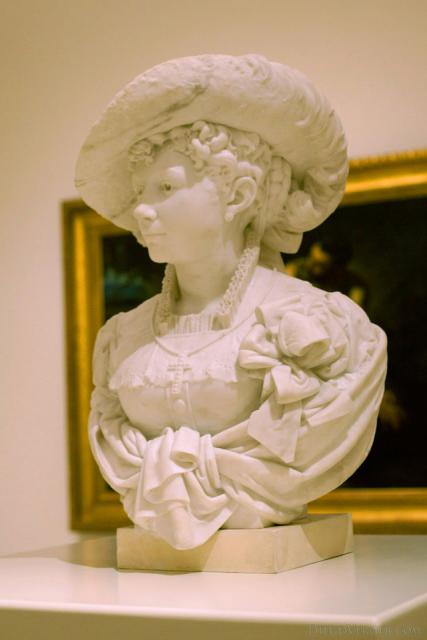 Medieval paintings on wood of the 14th century

On the left, "Supplicant Soul between Saint Peter and Saint Paul." On the right, "Saint Michael Weighing Souls." Both paintings are from the church of Sant Cristòfol de Toses, in the province of Girona, and were made by Master of Soriguerola.

A bas-relief on limestone

Two works entitled, "Nativity" (top), and "Presentation of Jesus at the Temple" (bottom), made by Master of Albesa in the 14th century.

Annunciation and Three Kings of the Epiphany

Another piece of Gothic art, made by Ferrer and Arnau Bassa between 1347 and 1360.

Virgin of the Dove

A glazed terracotta sculpture made by Venancio Vallmitjana in 1887.

In the Modern Art section you can find several oil paintings made by Joaquim Vayreda, such as this one from 1877.

Capitals from the Camarasa pillar, photo 2

Another picture of capitals from the church of San Miguel de Camarasa, in which next to the scene from the garden of Eden there is a representation of a zoomorphic creature grabbing a child and a winged creature on top of them.

Dome of the National Art Museum of Catalonia in Barcelona 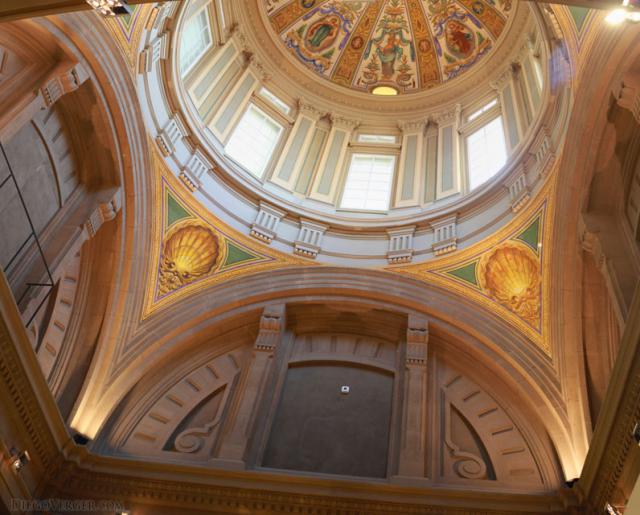 Interior view of the dome of the National Palace of Montjuïc, where the National Art Museum of Catalonia is located.

A painting by Joan Gascó made in approximately 1500, from the church of San Esteban of Granollers, in the province of Barcelona. This work is part of a 13-piece set; on either side, a partial view of other two pieces, "David" and "Moses."

Stucco relief and gold leaf made by Bonanat Zaortiga between 1430 and 1440.

Cabinet of the year 1400 painted with a scene of the burial of Jesus.

Oil painting on linen made in 1595 by El Greco.

A fresco from the church of Sant Cristòfol de Toses, in the province of Girona.

Virgin and Archangel Gabriel from an Annunciation

Stone sculptures from the 14th century attributed to Master of Anglesola ("Mestre d’Anglesola").

An oil painting on linen capturing with great realism an everyday scene of a woman warming up next to the fire, made by Manuel Cusí in 1896.

Photo of the museum façade in landscape orientation. 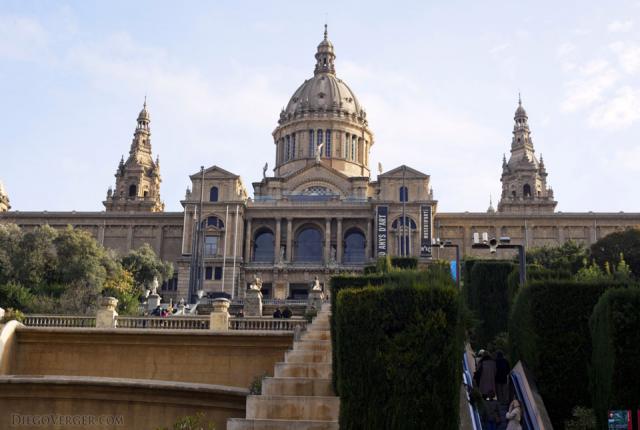 The "Font Màgica" (magic fountain) of Montjuïc. In this photo you can see the four columns, a symbol of Catalonia. 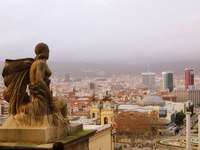 The Four Columns of Catalonia

The four Ionic columns in front of the National Art Museum of Catalonia represent the four stripes in the Senyera, the Catalan flag.

Façade of the National Art Museum of Catalonia

Photo of the museum façade in portrait orientation.

A view of Barcelona from the Art Museum of Catalonia to Plaza España, along Queen Maria Cristina avenue. 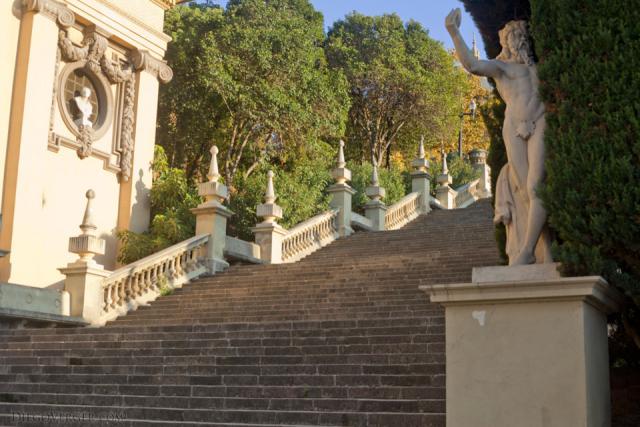 Panoramic picture of Barcelona from the National Art Museum of Catalonia 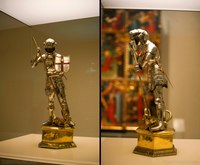