This clock tower is located on Place du Molard, a historic square in the center of Geneva. Since the 14th century, this tower was initially used as a control and defense post to protect this area, which was a port. The tower was rebuilt in 1591 and since then, its appearance has been kept intact. Nowadays, there are no fishmongers selling the catch of the day in this pedestrian square as they used to do a few centuries ago, but it is still a commercial area with a wide variety of shops, such as cafés, restaurants, and flower shops, just to name a few. On the RTS website, a Swiss Radio and Television network, you can see a video of Place du Molard in 1954, a time when trams and cars still circulated through it, and you get a glimpse of this tower by the end of the video.

One of the most characteristic elements of the city of Geneva is the Jet d’Eau, or water jet, which is hard to miss. This powerful water fountain propels water 140 meters (460 feet) in the air. Initially a small jet was created in the hydraulic plant of Geneva in 1886 as part of a mechanism to release pressure, but years later it was modified to become one of the symbols of the city. It also helps lost tourists who do not use smartphones find their way around the city, like a water GPS.

Photo of the city of Geneva from one of the harbours in the Eaux-Vives neighborhood, between the English Garden and La Grange park. 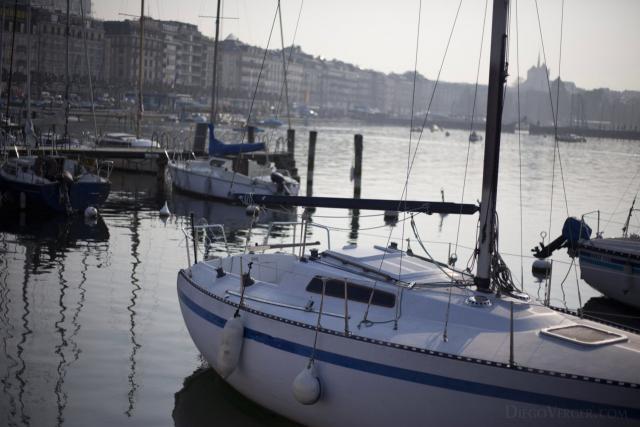 The highest building of the Old Town, which stands out in the silhouette of Geneva, near the middle part of the photo, is the St. Pierre Cathedral.

Villa La Grange was built in the beginnings of the 18th century by the Lullin family and is the central building of this park. When the land was acquired by the Favre family later in that century, Guillaume Favre commissioned the construction of a library, and amassed a remarkable collection of thousands of works from different eras, origins and topics. In 1917, his grandson, William Favre, donates the grounds of the park and Villa La Grange to the city of Geneva, in order to open the park to the public, and later on guided tours of this historical library begin to be offered.

Photo of the terrace of Villa La Grange, which faces Lake Geneva.

Photo of the terrace of the Villa La Grange.

Detail of one of the ancient decorative vases placed on a side pedestal of Villa La Grange, with the image of a ram holding garlands.

View from the terrace of Villa La Grange

Detail of the ornamental work in the terrace railing of Villa La Grange. In the background, Lake Geneva and the right bank of the city on the other side of the lake.

The Mont-Blanc bridge is located on the Rhône River, at its exit from Lake Geneva. The first flag on the left corresponds to the coat of arms of the canton of Geneva, which consists of the union of the double-headed eagle, symbol of the Empire, and a golden key, symbol of the bishop. In the original design, two golden keys could be seen, with a similar layout to the Vatican coat of arms, but since the 15th century, only half of the bicephalous eagle and one golden key are united in a symbolic way. The remaining flags correspond to some of the other Swiss cantons. On this side of the bridge you can see: Neuchâtel, Valais, Vaud, Ticino, Thurgau, Aargau, Graubünden, St. Gallen, Appenzell Innerrhoden and Schaffhausen.

Jet d’Eau from the harbour

Photo of the Jet d’Eau from the Eaux-Vives harbour near the English Garden.

A duck next to the waters of the Rhône.

A fountain hidden among trees next to Villa La Grange, with the statue of a little mermaid with a laurel wreath, holding a fish. The fish-looking creatures at the base of the statue have a similar style and layout to those on the fountain of Pope Clement XI in front of the Pantheon of Agrippa in Rome.

Night time photo of sightseeing binoculars on the lake promenade on the left bank of Geneva. 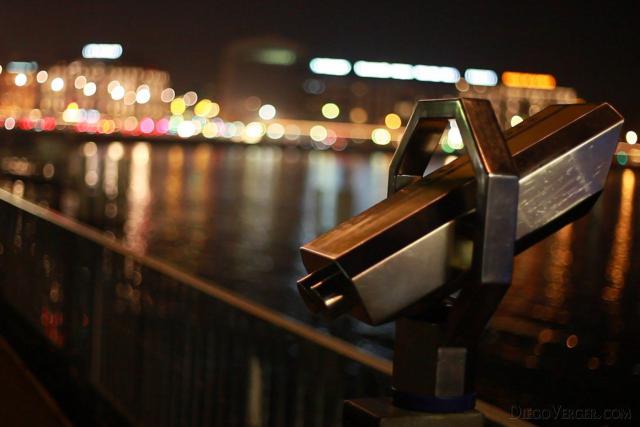 A view of Cologny, a town which is part of the Canton of Geneva, on the shores of Lake Geneva. The masts on the left correspond to boats docked at the Geneva Yacht Club, also known as the “Yacht Club de Genève.”