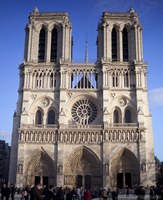 The Notre-Dame de Paris Cathedral is located in the Île de la Cité, which used to be part of the Roman town of “Lutetia”, mentioned by the emperor Julius Caesar in his writings as the settlement of the Celtic tribe of the Parisii or “civitas parisiorum” (city of the Parisii). This island surrounded by the river Seine was protected by ramparts against barbaric invasions during the times of the Roman empire, and its strategic importance would last throughout the centuries to eventually become the oldest part of modern Paris. In addition to the military-strategic importance of the island, the place had religious significance, since in the exact same site where the Notre-Dame Cathedral was built, there used to be a Roman temple dedicated to the god Jupiter, and then the Christian basilica dedicated to Saint Stephen, which was finally replaced by the Notre-Dame Cathedral. It is a Gothic cathedral, whose construction began in the year 1163 and was completed in 1345. Here you can see its North and South towers completed in 1240 and 1250, respectively. The three portals are, from left to right, the Portal of the Virgin, the portal of the Last Judgement and the Portal of Saint Anne.

In this photo you can see the West rose window, completed in 1225, which was the first one to be built among the three in this Cathedral, and it was a great achievement for the time given the weight this delicate part of the structure has to bear. Below it you can see the frieze known as the gallery of kings of Judah, a section that was particularly attacked during the French Revolution, and had to be rebuilt. The statues of some saints of Catholicism were also decapitated together with those of the kings, and some of these are found at the Cluny Museum in Paris, together with other pieces that originally decorated the Cathedral.

The portal of the Last Judgement, with a relief of Jesus on the tympanum, or triangular area of the portal. Below it, there is a frieze which represents, on the left, the blessed souls and the archangel Michael weighing souls; and on the right a few demons and the damned being carried away in chains. In the archivolt that surrounds the tympanum of the portal as concentric mouldings or covings, there are angels in the first two covings and various saints in the subsequent four. The last moulding contains sculptures of leaves, similar to the ones under the gallery of kings, with visible pine cones in groups of 3 and others hidden at the top and the sides. Three pine cones is an element that repeats in the circular structures above the rose window of this façade.

In this photo of the interior you can see the three levels of the cathedral, the first level or arcade, composed of large columns and pointed arches; the second level or triforium, the arched gallery above the lateral naves, which can be better seen in other pictures; and the third level or clerestory, where you can see the round stained glass windows on top, and the double windows at the bottom shaped as pointed arches.

Columns and pointed or ogival arches of a lateral nave of the Notre-Dame Cathedral. In this photo you can see both clustered columns, which continue the pointed arches along the column through multiple smaller columns, as well as smooth columns with elaborate capitals. 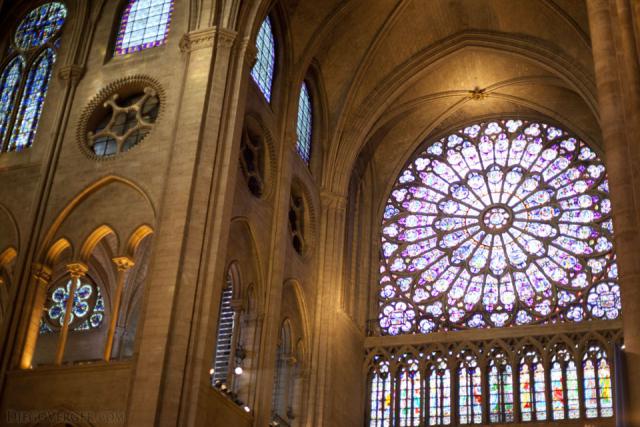 Photo of the quadripartite ribbed vault adjacent to the south rose window, with a golden decorated boss at the intersection of the ribs, and blind ogival arches on both sides of the rose window. 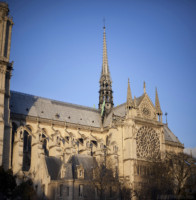 The south rose window and the spire as seen from the bridge known as “pont au Double”. The spire or “flèche” is a reconstruction by the architect Eugène Viollet-le-Duc, since the original was destroyed by the revolutionaries in 1792. To the left of the rose window you can also see the flying buttresses, a lateral support system developed during the Gothic period to distribute the forces acting upon the walls to redirect them towards the ground.

An interplay of lights produced by the stained glass of the cathedral’s southern rose window.

A rear view of the sculpture in the main altar of the cathedral, entitled "La Pietà" (Piety), a work of Nicolas Coustou, which represents the descent of Jesus from the cross.

A capital of Notre-Dame

In this photo you can see the pointed arches supported by the abacus of this column’s capital, flanking the central nave of the cathedral. In this capital there is the same type of design that repeats around the top of the rose window on the west façade, decorates the division between the second and third level in the exterior, and is present as well as in many other parts of the cathedral. In the background you can see the triforium.

Detail of a capital design in Notre-Dame 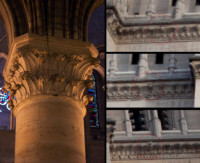 The design of the capital of the previous photo, although it might seem a strange motif of leaves or petals, by paying closer attention to some sections of the West façade, as in the three zoomed pictures on the right, you can see they are part of a progressive metamorphosis into gargoyle-like creatures.

A photo of the gallery of the triforium, the stained glass windows of the clerestory and a sexpartite vault in the central nave of Notre-Dame de Paris. 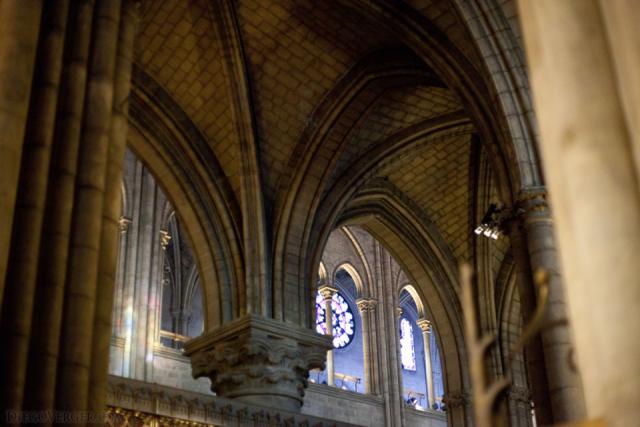 A capital supporting the pointed arches, seen from a lateral nave of the cathedral. In the background, the triforium.

Pointed arch of a lateral nave of Notre-Dame

In the background you can better appreciate the second level of the cathedral, or triforium.

In the upper part you can see the ribs that make up the ribbed vault, ending in the columns, which divide the clerestory in various bays with stained glass circular and double pointed arch windows. At the bottom of this photo is part of the triforium, with its bays of pointed arches and double openings.