Inaugurated at the Universal Exhibition of 1889, the world-renowned tower designed by Gustave Eiffel remains visible day and night, thanks to its 336 sodium lamps.

Built in commemoration of the 100th anniversary of the French Revolution, for many, the Eiffel Tower represents much more than an ornamental monument, which was present in times such as the Nazi occupation of France, during which many members of the French Resistance might have looked upon it as a constant reminder that everything is possible when fighting against tyranny and oppression. 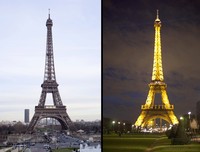 Comparative view of the Eiffel Tower by day and by night.

In this closer view of the tower by night the complexity of its structure can be appreciated, which was an architectural achievement for the time, and even today it is rare to see structures that requiring such complexity, preserve their architectural efficiency at the same time that they enhance the beauty of a city.

The illumination of the Eiffel Tower is the work of Pierre Bideau. The projectors are turned on by sensors every night completely illuminating this 324-meter tower (1063 feet). The beacon at the top is composed of computer-controlled motorized projectors that rotate automatically. 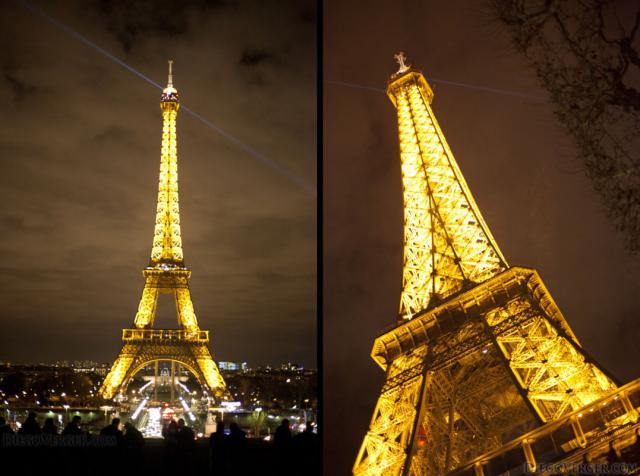 Another photo of the tower’s lower arch illuminated at night.

The beacon of the Eiffel Tower was added for the countdown to the year 2000, along with the sparking lights that light up every hour while the tower is turned on.

This side of the tower is also known as Trocadero, and is precisely the side facing the gardens of the Trocadero, on the other side of the Seine. Below the first floor of the Eiffel Tower, which is 57 meters (187 feet) above the ground, there is a list of names that correspond to French engineers, scientists, and mathematicians whose contributions to their respective fields made possible the construction of the tower. The second floor is at 115 meters (377 feet).

Port de la Bourdonnais is next to the Eiffel Tower. This is one of the starting points of many sightseeing cruises on the Seine. The docks and paths along the Seine are ideal places for photography all day long, but during the night interesting discoveries can be made given the great variety of lights that animate the riverside of the Seine.

The weapons purchase scene from the movie Ronin was filmed next to this bridge, in which Robert De Niro’s character advices Jean Reno not to follow Sean Bean’s impulsive character into the lateral tunnel to make the exchange, since the bridge of Alexander III is an ideal place for an ambush. The sniper was indeed in one of the numerous parallel beams that make up the lower structure of the bridge, as you can see in the center of the photo. This is a view from the Orsay Quay, on the opposite side of where the movie was filmed.

Detail of the Louvre Pyramid

Close view of the Louvre’s glass pyramid and, in the background, the Sully Pavilion or “Pavillon de l’Horloge” (Clock Pavilion).

The Richelieu Pavilion and the Turgot Pavilion in the background.

The Colbert Pavilion as seen from the Napoleon courtyard.

In the background, the Denon Pavilion of the Louvre Museum. In the foreground, the statue of Louis XIV on horseback in the courtyard of the Louvre. In front of the palace of Versailles there is another equestrian statue of the same king. 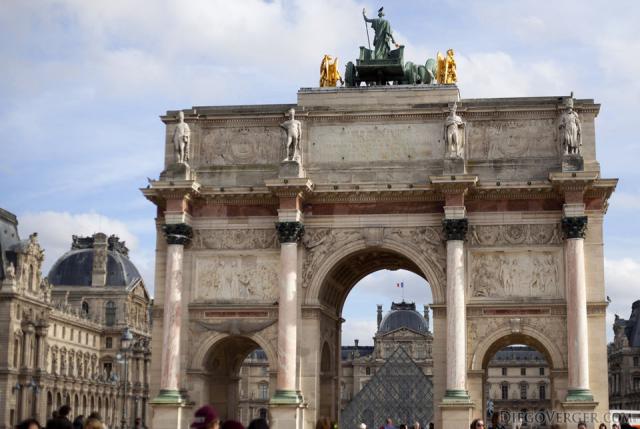 Napoleon commissioned this triumphal arch, in the likeness of the Arch of Constantine, on the same year that construction of the Arc de Triomphe de l’Étoile began in Charles de Gaulle square. Both triumphal arches have the same orientation and are connected in a straight line by the Champs-Élysées Avenue.

West façade of the Sully Pavilion, as seen from the Napoleon Courtyard.

Façade of the Colbert Pavilion

The sculpture at the top of the Colbert Pavilion is entitled “La Terre et l’Eau” (Earth and Water), and below you can see the “Cariatides” (Caryatids), both the work of Nicolas-Victor Vilain. On the sides, the two statues that stand out in front of the sky correspond to depictions of “La Science” (Science) and “L’Industrie” (Industry) by Élias Robert.

Detail of the Sully Pavilion

A closer view of the Sully Pavilion, where you can better see the clock and statues and reliefs that decorate its façade.

Another view of the Richelieu Pavilion.

The great glass pyramid as seen from the Napoleon courtyard at the Louvre. 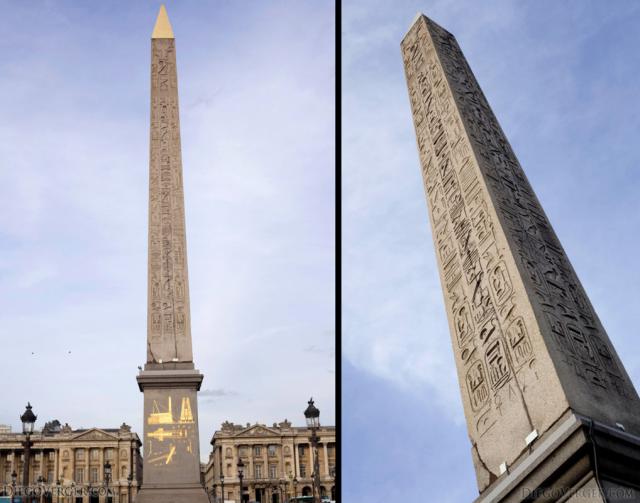 The Luxor obelisk in Place de la Concorde in Paris. This 23-meter (75 feet) Egyptian obelisk or “tekhenu” comes from the Temple of Luxor, and was brought to Paris in 1833. Its twin obelisk still stands today at the entrance of the Temple of Luxor in Egypt. The pyramid-shaped top of the obelisk (or pyramidion), was added in 1998, is made of gold and bronze, and supposedly matches the aspect of original.

Detail of the Arc de Triomphe in Paris

The Arc de Triomphe in Place Charles de Gaulle, commissioned by Napoleon I in 1806 and designed by Jean-François-Thérèse Chalgrin. It took 30 years to build. This is its south east side, which faces the Champs-Élysées Avenue. This avenue connects this arc in a straight line with the Luxor Obelisk in Place de la Concorde. The relief on the right, below the horizontal Hellenic pattern, is entitled “Le Départ des Volontaires de 1792” (The Departure of the Volunteers of 1792), or the “Marseillaise,” and portrays Freedom embodied as a winged woman. It was made by François Rude. The relief on the left is entitled “Le Triomphe” (Triumph), was made by the French sculptor Jean-Pierre Cortot, and represents Napoleon Bonaparte being crowned by the goddess Victory.

Basilica of the Sacré-Cœur

The “Sacré-Cœur” (Sacred Heart) is located on the summit of Montmartre, in the 18th district of Paris. It was designed by the French architect Paul Abadie in a Romanesque-Byzantine style. Its construction began in 1875 and was completed in 1914, but its consecration was postponed by the onset of World War I. 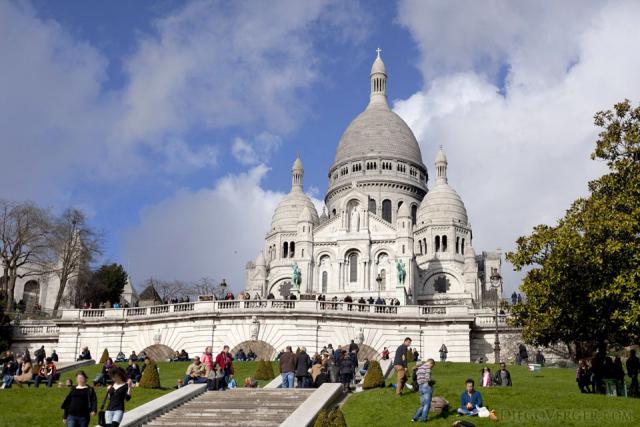 Sphere of Flowers and Sacré-Cœur

An original sphere-pot of flowers in the Louise Michel square next to the Sacré-Cœur.

Interior view of the portico of Sacré-Cœur with the Romanesque style arches and vaults. Paul Abadie was particularly interested in medieval architecture, and also participated in the restoration of the Notre-Dame Cathedral.

Façade of the Sacré-Cœur

Under the statue of Jesus the inscription reads “Cor Jesu Sacratissimum” (Most Holy Heart of Jesus). Flanking Jesus, on the right hand side of the photo, the statue of Joan of Arc, and on the left, the statue of king Louis IX, also known as Saint Louis.

Domes of the Sacré-Cœur

The central dome reaches a height of 83 meters (272 feet). The exterior of the basilica is made of travertine stone, a rock composed of calcium carbonate, which is extremely hard but has a fine grain, and at the same time has the advantage that it exudes calcium salts when it comes into contact with slightly acidic rainwater, which explains the always pristine white color of the basilica.

Equestrian statue of Joan of Arc

Statue of the heroine of France on horseback.

Statue of king Louis IX, of the Capetian dynasty.

A griffin-looking gargoyle stands out in the center of this photo, on the eastern side of the basilica.

A gargoyle on the western back side of the Sacré-Cœur, as seen from the Chevalier de La Barre street.