In a mixture of fantasy and originality, the architectural and ornamental structures designed by Gaudí merge with the nature of the Park. This work was commissioned to Gaudí by count Eusebi Güell, and construction began in 1900, although the initial plan was not to create a park but a residential complex. In this photo you can see the pavilions at the main entrance of the park.

The buildings at the entrance of the park are amongst the few built out of the 60 that had been planned in the original project, with the distinctive Gaudí style. Other houses in the park include the Gaudí House Museum, shown later on, and a residence that was used by count Güell for some time, which is currently a school. 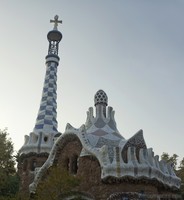 The administration pavilion crowned by a pine cone ornament, and the four-armed cross on top of its tower, is mainly used as a bookshop and a souvenirs shop. 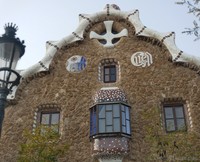 This is the “Casa del Guarda” (porter’s lodge), a pavilion built at the gates of Park Güell, which was intended to be the house of the custodian in the original plans for a residential complex. It is currently used as a permanent exhibition of photos and films about the history of Park Güell, and is part of the Barcelona History Museum. At the top you can see a cross pattée (?), sometimes associated with the Knights Templar, and other orders, an interesting solution for a round window. Count Güell was interested in the style of the British parks of the time, so he named the park in English, “Park Güell”, as you can see in the mosaics below the cross pattée.

Both from near and afar, you can see the level of detail in Gaudí’s designs, as in these mosaics in a curved frame of the administration pavilion.

The highest platform on the right, with gargoyles, corresponds to the Greek Theater, which consists of a large plaza for events, and also serves as a great viewpoint of Barcelona. On the left, the main stairs of the park, which are decorated with a quite impressive mosaic work, where every motif is unique.

On the left, the Catalan coat of arms with a snake. On the right, the dragon or salamander decorated with mosaics (trencadis style) in the main stairs of Park Güell. 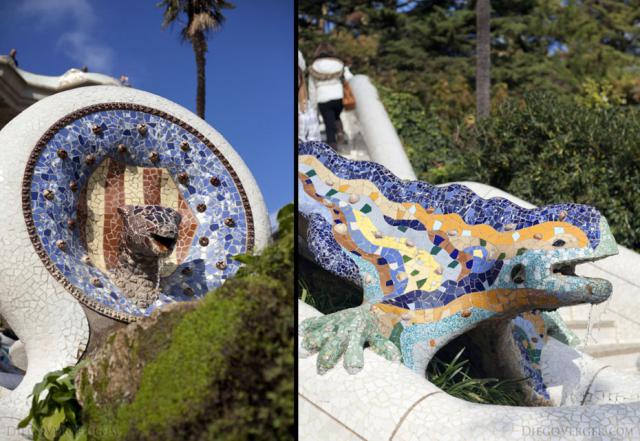 View of the city of Barcelona and the Mediterranean from the plaza of the Greek Theater, also known as Nature Square. In the foreground you can see the “Casa del Guarda” or porter’s lodge, by the entrance of the park.

These huge Doric columns are highly resistant, but are also hollow, since Gaudí designed them to fulfil a dual function. They serve as a support for the Greek Theater square above, and are also part of a drainage system of the square, which ends in a cistern excavated in the rock deep below. 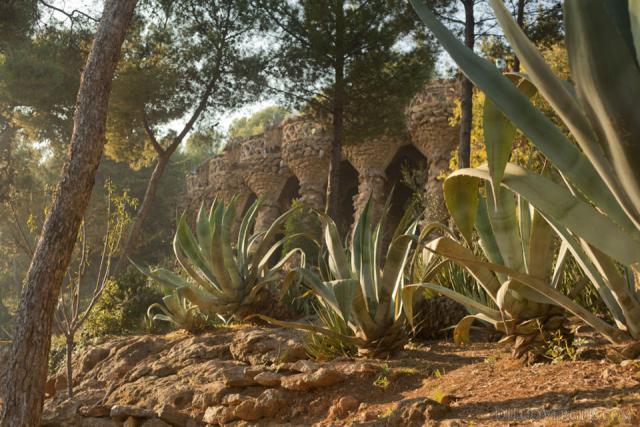 Walking along Park Güell’s paths you stumble upon views like this one in which the structures designed by Gaudí adapt to the environment simulating natural formations, at the same time that they play a practical role, as this viaduct that serves as a covered pedestrian path below, and a road apt for vehicles above, in a mix of practicality and art immersed in nature.

Another exterior view of one of the viaducts of the park. The upper part was originally intended for carriages.

Gallery of a viaduct

These galleries connect different sectors of the park, and serve as support for the platforms above, originally intended for vehicular traffic, although they are mainly used by the visitors of the park now. It is common to find musicians playing guitar in these galleries, who choose these structures for their acoustic effect, and their stone seats at the foot of the columns.

Ceiling of a gallery

This is an inside view of the viaduct of the previous photo. The support columns create a truly artistic gallery.

Detail of a viaduct’s ceiling

Another view of the ceiling of one of these galleries that are part of the trails in Park Güell, with arches that look like a reflection of a Gothic past.

A portico with inclined columns that adapt to a retaining wall.

This House was built as a sample property for the original project of a residential complex. Upon cancellation of the former project, it was acquired and used as a residence by Gaudí from 1906 to 1925. Now it is a museum. 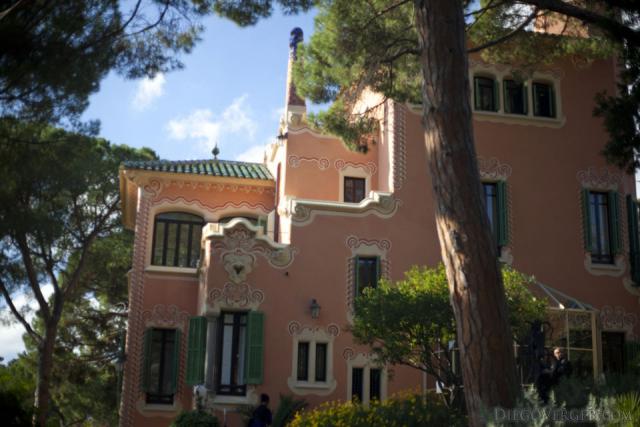 This tunnel is located in the garden of the Gaudí House Museum, and makes up a natural frame, ideal for photographic portraits.

Sculpture entitled Cosmos, a copy of a sculpture of the Basilica of the Sagrada Familia from 1900.

Interior view of the gallery of one of the three viaducts in Park Güell.

The cross of the administration pavilion. The four-armed cross is very characteristic in Gaudí’s works, or its bidimensional version, the cross pattée, as the one shown in the “Casa del Guarda” next to this building.

Walking in park Güell is like walking along the paths of an open-air museum, where it is usually necessary to stop and contemplate in order to differentiate where nature ends and the work of Gaudí begins, as in the case of these stone column-pots with plants on top.

This plaza is also known as Nature Square. It is sometimes used for large events.

Once outside Park Güell, two blocks down Larrard street (carrer de Larrard), there is a shop dedicated to Gaudí, called Gaudí Experiencia, with all kinds of designs, souvenirs, and models invented by Gaudí, some of which are designs that were never built, like the tower of the photo on the right. This shop also projects a 4D film about the works of Gaudí. The photo on the left shows a life-size statue of Gaudí in this store, next to which many tourists pose for their photos. The bench is an imitation of the winding railing/bench around the perimeter of the Greek Theatre square in Park Güell.