The first stone castle was built in the 13th century, to replace a wooden structure, which dated from the year 950. Later on that castle was demolished, and the current Blarney Castle, which is attributed to Cormac Laidir Mac Cárthaigh [MacCarthy or McCarthy] (1411-1494), was completed in the 1480s. One of Cormac Laidir’s descendants, known as Cormac MacDermod MacCarthy (1532-1616) became famous for his skill to delay complying with requests from the English crown with eloquence and flattery. That cunning strategy contributed in part to the legend of the Blarney stone about its power to grant eloquence to whoever kisses it. Although the castle is famous for its long history and many legends, the estate surrounding the castle and the carefully designed gardens offer various areas of interest to explore beyond the medieval stronghold. On the left, slightly hidden, there is a second tower, whose interior can be seen in another photo later on. 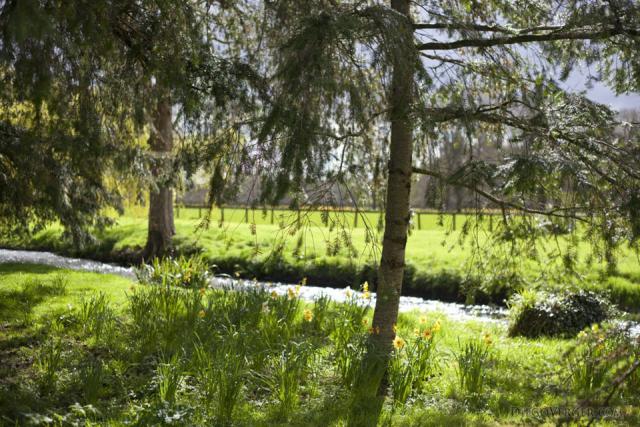 River Martin flowing along a grove near the entrance to the castle grounds.

A picnic zone and part of the arboretum in the castle grounds. On the right, some trees of the “Cherry Walk” leading to the castle.

Some rooms do not have floor or roof, such as the Chapel or the Banqueting Hall, but their stone walls remain intact and give a good sense of the original room structure.

This is the hearth in the Great Hall of the castle, which has lost its floor and is now floating over the basement.

Blarney Castle has a garden with exotic species such as mandrake, opium, wolfsbane, and cannabis, which were used as common herbal remedies in the past. 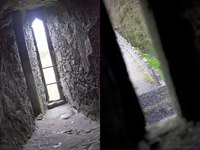 As you climb the narrow spiral stairs to the top of Blarney Castle you can go through some of the rooms, such as the Earl’s room or the Young Ladies’ room, and get a glimpse of the view their ancient inhabitants had through the many loopholes of this veritable fortress. 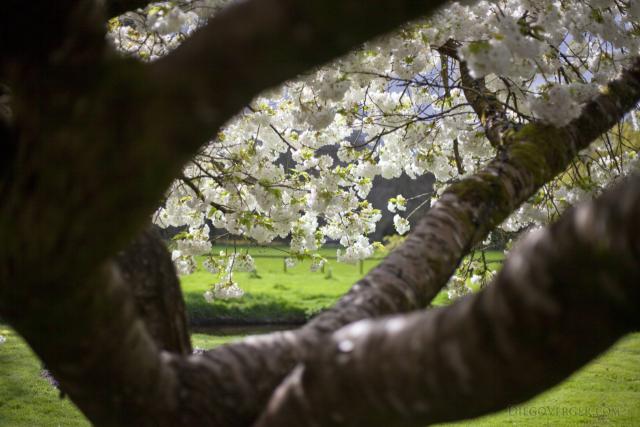 A cherry tree with white blossoms next to River Martin. The Cherry Walk could be considered the Blarney gardens entrance, leading visitors to the castle flanked by wonderful trees like this one.

Photo of River Martin and the beginning of the gardens to the east of the castle.

One of the exotic trees which evoke a subtle sense of mystery and fantasy in this zone of the castle grounds known as Rock Close.

The Castle and its famed Rock

On the left of the photo, embedded in the lower part of the battlements on the south wall of the castle, is the famous Blarney Stone that many visitors come to kiss, holding onto the iron bars that can be seen in the picture, and are an addition for the modern visitors’ protection. The feat of kissing the stone below the battlements will grant them, according to legend, the gift of persuasion and eloquence. They will also be granted with a significant increase of their oral flora strains. The stone in question would correspond to half of the Stone of Destiny (Stone of Scone or "An Lia Fàil"), which Robert I, the Bruce, King of Scotland, gifted to Cormac MacCarthy to thank him for his help in the battle of Bannockburn in 1314, by providing Irish soldiers that proved essential for victory.

An interesting growth of trees in the forest to the west of Blarney Castle.

These are the trunks of the trees previously shown, united in a unique formation in the Blarney forest.

This is the path along the forests, which takes about 1 hour 30 minutes to be walked, and leads to Blarney House, an 1874 Scottish Baronial mansion to the south of the castle.

Detail of one of the flowers from the previously shown trees.

Battlements of the surrounding wall of Blarney Castle. Blarney Castle is a type of castle known as tower house, in which the main structure was on one side of the grounds next to a field or bawn, surrounded by stone walls. The main tower in this type of castle served a double purpose, defense and living quarters.

The interior structure of this little tower has collapsed throughout the centuries, which offers an unusual view of a medieval lookout tower.

A river bank of River Martin

Another photo of this area of the castle grounds. 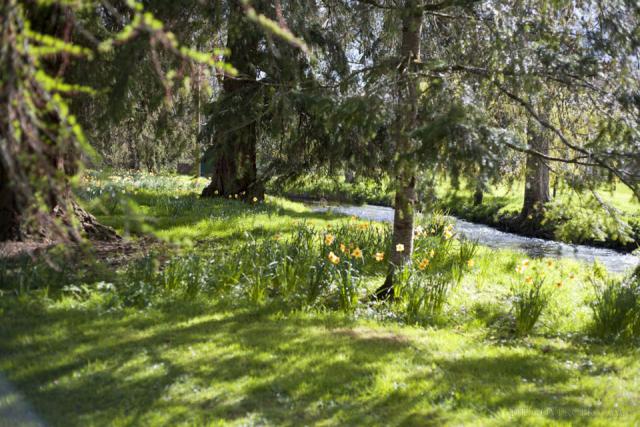 Bridge over the Blarney River

A little bridge in the gardens of Blarney Castle.

A wall among the ruins of "the Court," a 1739 Gothic mansion commissioned by James Jeffreys, owner of the castle during the 18th century, to provide more comfort than the medieval chambers.

One of the legends surrounding the Blarney Stone tells it was a witch who explained the MacCarthys how to use the powers of the stone as a way of thanking them for saving her from drowning. Another less poetic, and a little evil-minded, non-official version of the legend that circulates in the druid zone of the Blarney forests tells that the witch screamed out the explanation while the MacCarthys attempted to drown her.

The Witch's Grove of Blarney Castle

This tree is above the witch’s kitchen, and has grown as a natural roof for this sinister cave in the Rock Close area of the grounds. As in many other parts of the castle gardens, the artificial merges with nature in an imperceptible manner, creating a subtle atmosphere of fantasy.

The area known as "Rock Close" combines some artistic gardening modifications with works of nature, increasing the mystery of this grove in the castle gardens.

The Woodland Walk traverses the grounds to the west of Blarney Castle, and even takes you up to the lake known as Blarney Lough to the south, where treasures were supposedly thrown into during an ancient siege of the castle, when eloquence could no longer stop a confrontation, and only cunning remained as the right tool to deal with superior armed forces.

Photo of the south wall of Blarney Castle, where the Blarney Stone or Stone of Eloquence is located.

The Fern Garden of Blarney Castle 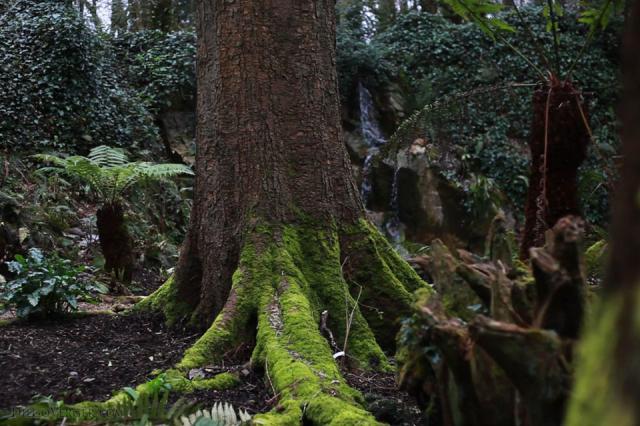 A tree in the Fern Garden. In this garden, located by following Woodland Walk or the Lake Walk along the river to the west of the castle, the expert gardeners of Blarney have created a unique environment with no less than 80 fern varieties.

A small cascade next to the "Wishing Steps," one of the many places of interest in Rock Close.

Another photo of the main tree in the witch’s domain, an integral part of the kitchen-cave.

The Dungeons of Blarney Castle

The dungeons entrance is on the north side of the castle. These tunnels and chambers are quite narrow and slippery, but used to be an efficient and essential resource during times of siege, since they were used to store water.

Part of the town of Blarney as seen from the top of the castle.