East entrance to the citadel of Carcassonne, where you can see the towers of the gate, forming a small defensive fortification in the inner wall. On the bottom left, the access to the drawbridge that allows to cross the pit between the inner and outer walls of the fortress. On the bottom center, the sculpture of Lady Carcas, which can be better seen in a later photo.

Panoramic view of the citadel from the New bridge ("Pont Neuf")

The citadel of Carcassonne over the hill, where you can see the inner and outer walls, as well as the Count’s Castle ("Château Comtal") on the center of the picture. On the right, the Old bridge ("Pont Vieux"), the most direct way to walk to the citadel from the modern city of Carcassonne, unless you’re up for a swim.

On the left is "Rue Avant Porte de l’Aude" (the street in front of Aude Gate) parallel to the wall. In the horizon you can see the silhouette of the Pyrenees mountain range. The street next to the outer wall and the lower tower is the one taken by Robin of Locksley to escape from Nottingham Castle in the movie "Robin Hood: Prince of Thieves." 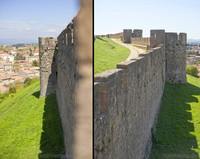 This wall was built in the 13th century, becoming the first line of defense of the fortress.

The inner wall was originally built by the Roman Empire, and many sections date from the 3rd century. As shown on the picture, many different types of materials were used along centuries of reconstructions.

Sculpture of the Saracen princess who, according to legend, resisted Charlemagne’s forces, and retained control of the citadel. 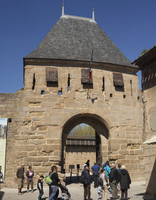 Entrance to Comtal Castle or the Count's Castle of Carcassonne

The last line of defense in this impregnable fortress, which for centuries was never taken by force. Even nowadays, not even tourists can take it by force and must pay their entrance fee if they are to enter the castle. The castle’s narrow bridge forces any invading force to adopt a disadvantageous line formation, leaving it exposed to attacks from both flanks coming from the defensive towers on the sides of the bridge.

Tower and bridge of Comtal/Count's Castle

The south tower of the castle, the curtain wall next to the twin towers of the entrance, and below, the access bridge.

The bridge, towers and curtain walls of Count's Castle 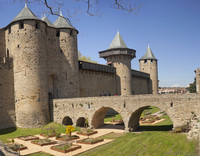 In the pit you can see the garden of the Count’s Castle, which can be accessed through the north part of the citadel. This area of Carcassonne was also used in the final scenes of "Robin Hood: Prince of Thieves" when Robin and Azeem are catapulted over the wall by Will Scarlett in order to access the barbican of the castle, and obviously to avoid the entrance fee, and then they run along this bridge to attempt and rescue Marian from the Sheriff of Nottingham.

The basilica in the south part of the citadel dates from the 10th century, although the building’s construction was completed in the 12th century. The building combines Romanesque and Gothic styles due to the several modifications and reconstructions, such as the addition of gargoyles, the rose window, the spire or the modification of the apse.

Biforium or bifora window in a gallery of the west inner wall of the citadel, over the Aude Gate.

Wooden gallery on the wall of the Count's Castle

View from the inner courtyard of the castle.

Streets of the medieval citadel of Carcassonne 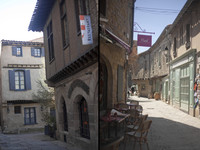 There are several restaurants and craft shops in the citadel, which have been integrated into the medieval town while keeping an ancient aspect n its streets as much as possible.

The towers and drawbridge at the Narbonne Gate 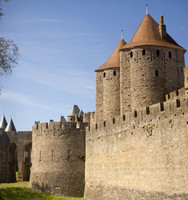 A view of the pit around the Cité of Carcassonne by the Narbonne Gate.

Interior of the Saint Nazaire basilica in the citadel of Carcassonne

This basilica suffered severe damages during the Albigensian crusade, the war of pope Innocent III against the Cathars, and the original Romanesque structure was modified by incorporating Gothic elements, such as the ogival or pointed arches and quadripartite vaults on the picture, creating a particular basilica from an architectural standpoint, which blends both styles. 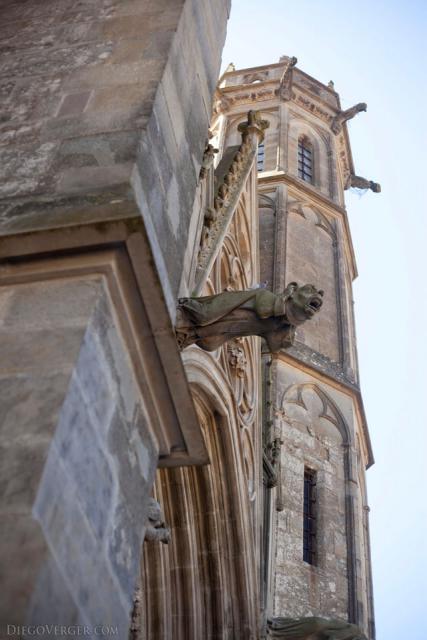 Statue of Joan of Arc in the Saint Nazaire basilica 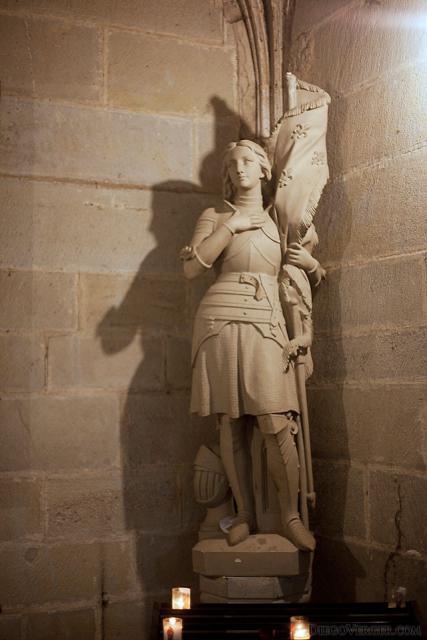 Interior view of the rose window’s tracery in the Saint Nazaire basilica, and the adjacent Gothic vault.

The walls of the Cité of Carcassonne 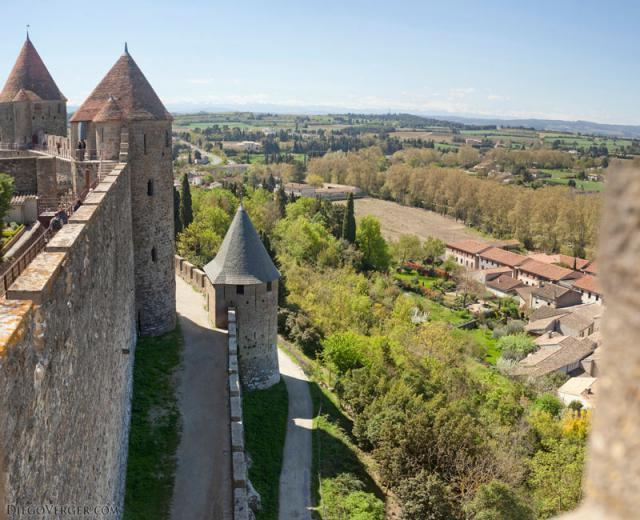 On this photo you can appreciate the different lines of defense of the citadel.

Saint-Paul tower of the Count's Castle 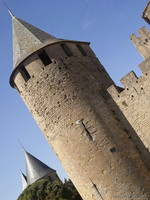 Here you can see the tiled cupola and the restoration of the upper section.

Gallo-Roman tower "de la Marquière" next to the Rodez Gate

In this photo you can better see the variations in the wall’s composition, including the most ancient Roman layers with red brick, and the later reconstructions at the Rodez Gate.

North gate of the inner wall of the citadel.

Tower of the inner wall, outer wall and the palestra between the walls of the citadel.

Interior courtyard of the Count's Castle

The construction of Comtal Castle begins in the 12th century with the building on the left, next to the Roman wall.

The garden, bridge and towers of the Count’s Castle ("Tour de Casernes" and "Tour du Major").

Compartment with multiple loopholes and a wide viewing angle in one of the towers of the inner wall.

The modern city of Carcassonne viewed from the medieval city

At the top, between the buildings of Carcassonne, the church of Saint Vincent stands out, which is a Gothic building with an octagonal bell tower.

Street in front of Aude Gate

External view of the Rigal tower or Notre-Dame tower and, on the right, "les lices," also known as palestra, the path between the walls that was frequently used by knights during medieval times as a training ground. 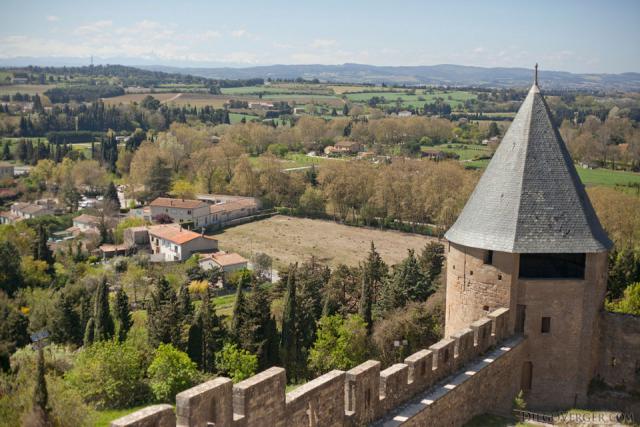 View towards the south of the medieval city up to the Pyrenees, whose snow-covered peaks can be distinguished on the left, and, on the right, the "Grand Brulas" tower of the southwest corner of the outer wall.

The bricks and materials used in the walls vary due to the restorations and reconstructions performed throughout time.

North transept tower of the Saint-Nazaire church of Carcassonne

Detail of a round tower and its scaly-looking cupola

These cupolas are part of the reconstruction of the medieval city performed during the 19th century by the Parisian architect Eugène Viollet-le-Duc.

Towers and curtain walls of the Count's Castle

Photo of the walls and their wooden galleries between the towers of the castle, as seen from the bridge.

The Count's Castle and the Pinte tower

The Pinte tower of the castle stands out due to its rectangular shape. The original aspect of many of these towers was modified in the 19th century with the addition of cupolas, during the restoration carried out by Viollet-le-Duc. Viollet-le-Duc was criticized at the time for granting a northern look to the castle towers and for not preserving the exact original aspect, but just as it has happened for centuries in the case of the walls, the work on the towers had to be adapted to structural needs and conditions, according to the knowledge and criteria of the period. Nevertheless the variety of towers grant the citadel an original and memorable appearance.

Ramparts walk and merlons of the Notre-Dame tower in the northern outer wall.

Detail of a Gallo-Roman tower in the inner wall

Detail of the Roman towers, which protrude from the walls with a characteristic horseshoe shape, the roof structure and the embrasures or loopholes.

Each merlon has an arrow slit, which allowed archers to shoot while still protected behind a merlon, instead of exposing themselves to perform the shot between merlons, as was customary in other fortresses.

A section of the fresco made by Cité Création in 1991 on the wall of Notre-Dame de l’Abbaye on Trivalle street, near the Old Bridge, which depicts scenes from the history of Carcassonne in each of its 11 letters.

Detail of a tower of the citadel's wall

Tower "du Coin" on the southwest corner of the inner wall of the citadel, seen from the battlements walk. The tower’s window is a type of window with hinges, known as "Volet à rouleaux", which allowed faraway observation as well as communication with guards on the battlements walk, and furthermore they stayed closed by gravity, protecting from liquid or arrow rain.

The towers of Narbonne Gate 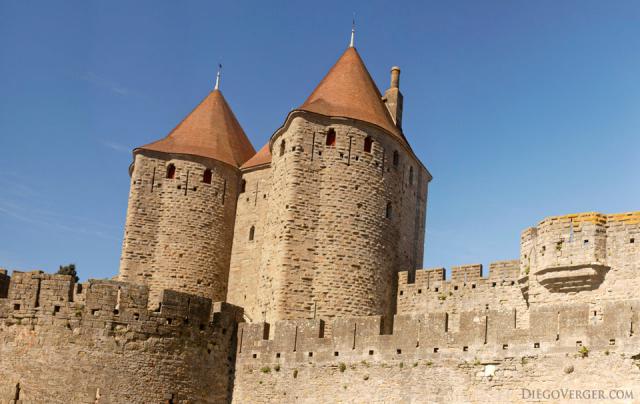 Panorama from the walls of the medieval city 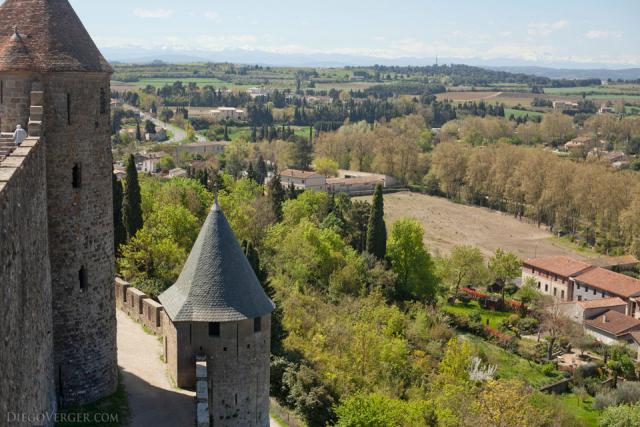 A view of the Languedoc-Roussillon region from the battlements walk of the inner wall. On this picture you can distinguish the snow-covered peaks of the Pyrenees along the horizon.

The Pont Vieux and the Cité of Carcassonne 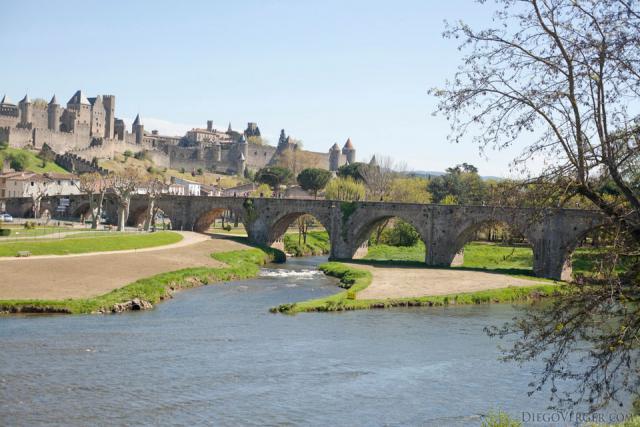 The Old bridge over Aude River.

Panoramic view of the citadel from the New bridge (Pont Neuf)

Entrance to Comtal Castle or the Count’s Castle of Carcassonne