Began by the Romans in the 1st century AD, the wall of Girona has been expanded during the Carolingian Empire, and reconstructed in the 14th century, and it includes several towers along its 2 km (1.24 miles) ramparts walk, which serve as excellent lookouts across the city and beyond. 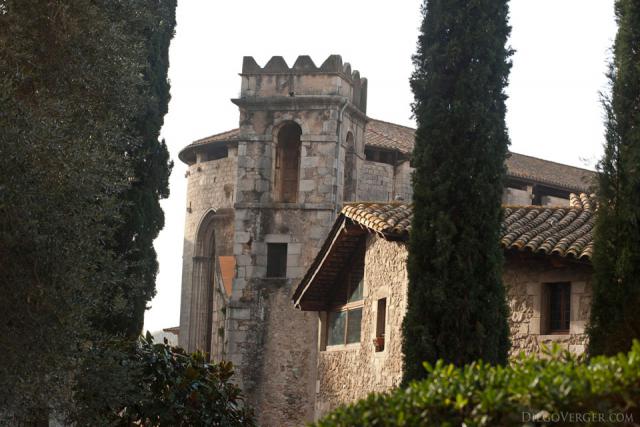 Bell tower of the Cathedral of Saint Mary of Girona, and round tower with blind arches.

Monument from 1894 in Independence square, a work by Antoni Parera i Saurina.

Romanesque style church from the 12th century in the historic center of Girona, next to the Archaeological Museum of Girona.

This staircase is on the exterior side of the wall, which corresponds to the cathedral cloister, and leads to the Julia tower, which can be seen on the upper left on the photo.

View of the northern historic center from the French Gardens ("Jardins de la Francesa"), including the Monjuïc and Nord neighborhoods as well. On the center of the picture you can see the bell tower of the Sant Pere de Galligants monastery.

Octagonal belfry of the Sant Pere de Galligants monastery, which is the Catalan Museum of Archaeology in Girona ("Museu d’Arqueologia de Catalunya a Girona").

A street of the Call of Girona

Bell tower of the Church of Sant Lluc

Doors of the Sant Lluc church

And the adjoining building on Ferran el Catòlic street.

The building in the background are also part of the city of Girona, and correspond to the West neighborhood ("Barri de l’Oest").

Elevated path in the Archaeological Walk

A path that borders the Girona wall by the Francesa gardens, parallel to Queen Joana’s Walk.

Façade of the Church of Sant Lluc

Detail of a statue in the niche of the façade of the Church of Sant Lluc of Girona.

Part of the Gironella tower ruins

The ancient fortification in the German gardens ("Jardins dels Alemanys").

Façade of the Girona Cathedral

Sepulcher in an arch of the Girona Cathedral cloister

Fountain with a sculpture of intertwined fish in Argenteria street, near Sant Agustí bridge.

Detail of the sarcophagus on the façade of Sant Feliu basilica

Sarcophagus from the 12th or 13th century, with low-relief of two angels, solar symbol with lamb carrying the cross, and multiple eight-pointed stars.

Sarcophagus on the façade of Sant Feliu basilica

Cupola of the Arab Baths (Banys Àrabs) of Girona

This is a Romanesque building from the 12th century, an imitation of the Turkish baths (hammam) in Jurats square.

Bell tower of the Girona Cathedral and the Catalonia Estelada 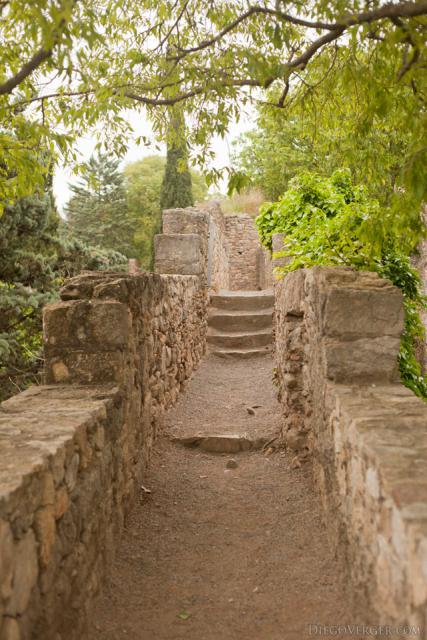 Battlements walk of the Girona wall by the Francesa gardens

Bell tower of the Sant Feliu basilica between trees 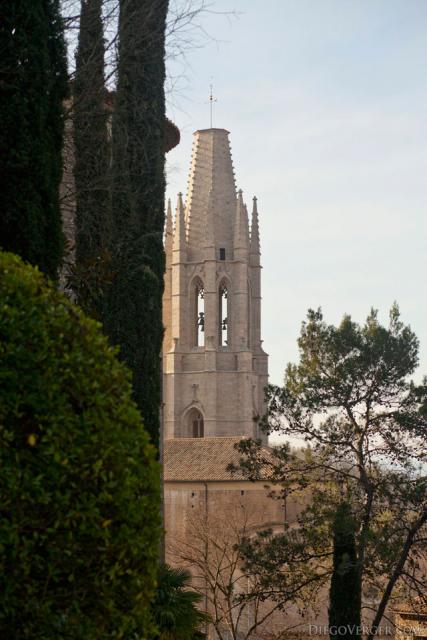 Streets on the historic center of Girona

On the left, Escola Pia street traversing one of the sections of the Girona wall. On the right, Bisbe Josep Cartañà street, behind the cathedral.

Girona wall and Julia tower from the Carolingian period

One of the expansions of the wall carried out between the 9th and 10th centuries.

Panoramic lookout window in the Francesa gardens of Girona

Bell tower of the Church of Sant Feliu

On the next gallery, Girona in Infrared, you will be able to see the interesting visual effect that can be achieved with an infrared filter to enhance the hills and architectural structures on another photo from about this same viewpoint.

Entrance to the Francesa gardens

Cornelia tower from 1362 as seen from the Archaeological Walk

The medieval tower on the Girona wall, commissioned by King Peter III of Aragon, which is located near the cathedral cloister. 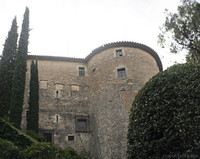 Detail of round tower on the Girona wall

The city of Girona to the north of the Galligants river

In this photo you can see the northern historic center and part of the Montjüic neighborhood, as well as a section of the Girona wall.

The Gothic bell tower of the Basilica of Sant Feliu (Saint Felix), ancient cathedral of Girona until the 10th century.

This bridge from 1877 is a work by Gustave Eiffel, who, ten years later, would begin in Paris his most famous work, the Eiffel tower.

The Eiffel bridge over the Onyar River

Detail of the Eiffel bridge of Girona

Commemorative plaque of the Eiffel bridge

On this plaque located on the east side of the bridge, you can read its ancient name as "Pont de les Pescateries Velles" (Bridge of the Old Fish Market), also known as "Pont de Ferro" (Iron bridge) or Eiffel bridge.

Tympanum and archivolt of the Sant Feliu basilica

Detail of the Romanesque tympanum and archivolt of the south gate of the Sant Feliu basilica.

Panoramic view of the buildings along the Onyar river in Girona

Building on the east shore by Independence square.