Dome of the Cathedral of Florence

Inspired by the Pantheon of Rome, Filippo Brunelleschi was responsible for this 15th century dome (built between 1420 and 1436), which crowns the Cathedral of Santa Maria del Fiore and is so representative of Florence. The construction of this imposing structure was quite a challenge at the time, but also an achievement at the beginning of the Renaissance; it has an external diameter of 45 meters (148 feet), and adds up considerably to the cathedral’s height of 114 meters (374 feet). When including the cross and the bronze orb, a work by Andrea del Verrocchio, the cathedral reaches approximately 116 meters (380 feet).

The city of Florence

A photo of the historic quarter from Michelangelo square. On the right, the Florence cathedral, and on the center, the Palazzo Vecchio, which can be seen in more detail in other photos.

Façade of the Cathedral of Santa Maria del Fiore

Just as Notre-Dame of Paris, the façade of Santa Maria del Fiore, which shares in part the Gothic style, includes a rose window; elaborate cornices; niches with statues of various personalities related to the history of Florence; and three portals with tympana portraying various religious scenes, such as the one on the photo representing Christ enthroned with Mary and John the Baptist.

Detail of the façade of the Florence Cathedral

A close-up view of the façade area above the central bronze door of the Cathedral of Santa Maria del Fiore, where you can better appreciate the details of the scene on the tympanum representing Christ on the throne, a work designed by Nicolò Barabino.

The multicolored inlaid marble paneling is similar to the Pisan Romanesque style of the cathedral and baptistery of Saint John in Pisa, another architectural achievement in the Tuscany region, although the Florentine Romanesque style has its uniqueness.

The abundant artificial lighting around the Duomo facilitates night photography, especially when you are not carrying a tripod with you.

The Abduction of Polyxena 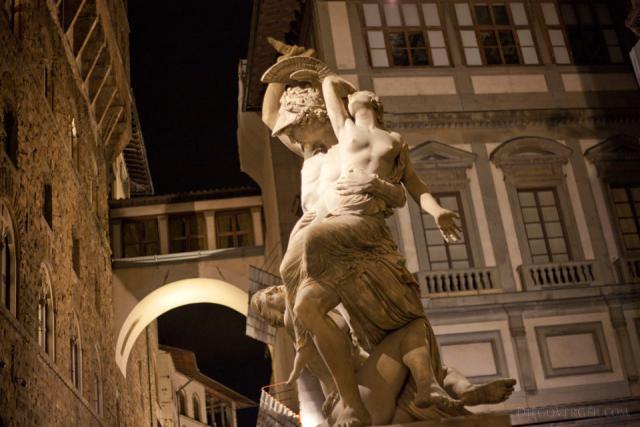 A sculpture by Pio Fedi in the Loggia dei Lanzi, an open air gallery in piazza della Signoria. On a side note, the title of this work is frequently mentioned in English as "The Rape of Polyxena," even in academic works, which is unfortunately a wrong translation of the original Italian title "Il Ratto di Polissena," where Ratto refers to abduction or kidnapping, not rape, which is known as "stupro" in Italian, and Fedi’s title for this work is definitely not "Lo stupro di Polissena." Behind the sculpture you can see the beginning of the Vasarian Corridor, a work by Giorgio Vasari, which is a communication linking Palazzo Vecchio and Palazzo Pitti, on the other side of the Arno River.

Santa Maria del Fiore from the streets of Florence 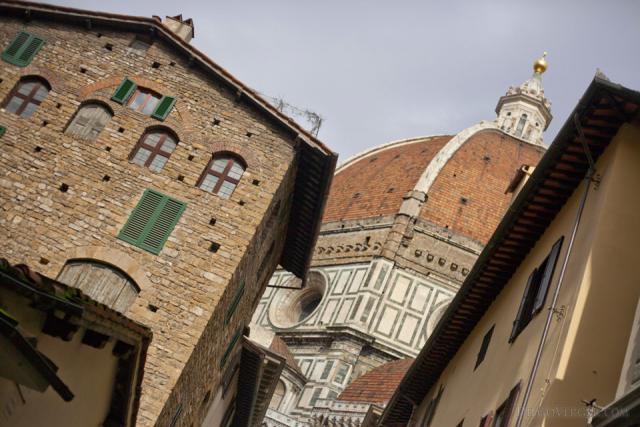 Buildings framing the cathedral in the historical center of Florence.

Ponte Vecchio ("Old Bridge") is a medieval bridge of 1345, although its origin is even more ancient, since it is probably the third built in the same location. The first one, built during the Roman empire, is believed to have existed already in the year 996, and was destroyed by floods, just as the second one. The third and current bridge was almost destroyed by the Nazis during the Second World War.

Night photo of the Old Bridge over the Arno.

Shop window of one of the handcrafted jewelry stores in the Old Bridge.

In this photo you can see up close the range of corbels of Palazzo Vecchio.

Bicycle of a store in the streets of Florence

An ornamental bicycle in a street corner of Florence.

The tower of Palazzo Vecchio, also known as the Arnolfo tower, since it was designed by the Tuscan architect Arnolfo di Cambio, also responsible for the original project of the Cathedral of Santa Maria del Fiore, or Duomo of Florence.

Detail of the façade of Palazzo Vecchio

Repeated over and over between the corbels you can see the 9 coat of arms of the medieval Republic of Florence.

Detail of the apse of the Florence Cathedral

This section of the building corresponds to the area of the sacristy and apse of the cathedral, which, just as the Cathedral of Pisa and many other Christian temples is oriented towards the East, following the east-west liturgical axis. This classical orientation has exceptions such as St. Peter’s basilica in the Vatican, which has the opposite orientation, or the Barcelona Cathedral and Notre-Dame of Paris, which have a south-east orientation.

Little angel with Dolphin in the Palazzo Vecchio

Photo of the statute entitled "Putto with Dolphin" by Andrea del Verrocchio, next to which you can also see the stucco decorated columns of the Palazzo’s first courtyard. 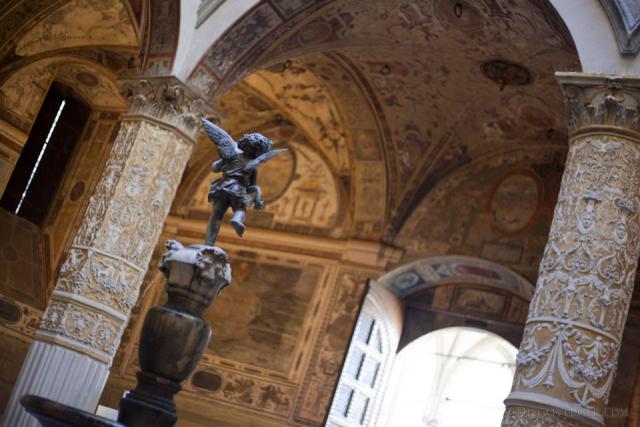 All the walls and ribbed vaults in the first courtyard of the "Old Palace" are decorated with frescoes, many of which are in reference to Austria, since they were painted on the occasion of the wedding between Francesco I de’ Medici and the Archduchess Joanna of Austria.

Giotto's Bell Tower next to the Florence Cathedral

In this photo you can appreciate the artistical and architectural consistency across the campanile and the cathedral. The white, red and green inlaid marble, as well as the geometric shapes, stylistically unite the campanile with the adjacent cathedral.

A closer view of the façade where you can see the rose window better, as well as the statues of 6 out of the 12 apostles, and those of Mary and Jesus. This layout is similar to the one in Notre-Dame de Paris, in that the façade is decorated with a series of statues below the rose window, like the gallery of the kings of Judah in Notre-Dame. 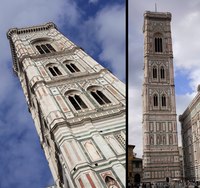 The famous bell tower of Florence, a project designed and started by Giotto di Bondone, although upon his death it was continued by Andrea Pisano, and lastly completed by Francesco Talenti in 1359.

Ribbed vaults decorated with frescoes in the first courtyard of the "Old Palace" of Florence.

Another of the sculptures in the "Loggia della Signoria" (or "Loggia dei Lanzi"), a work by the Flemish sculptor Jean Boulogne, also known as Giambologna.

Side door of the Cathedral Santa Maria del Fiore

North door of the cathedral’s nave, demarcated by two columns supported by lions. The wooden door features low-reliefs portraying a lamb with a cross, the symbol of "OPA," an organization within the medieval Florentine Guild of Wool, responsible for supervising and protecting the works ("Opere") of the cathedral; this symbol can also be seen throughout the works of the Miracle Square ("Piazza dei Miracoli") in Pisa.

Apsidiole of the Florence Cathedral 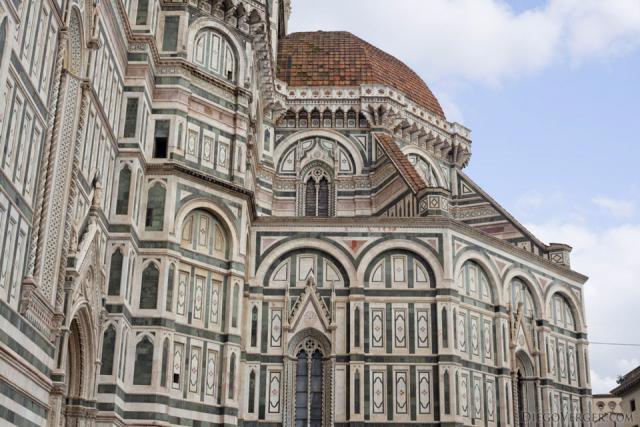 A south apsidiole and its dome.

Night photo of the octagonal base of Brunelleschi’s dome and an apsidiole in the south part of the Duomo.

Brunelleschi's dome of the Florence Cathedral

Interior of the first courtyard in Palazzo Vecchio

This is the front view of the previously shown sculpture entitled "Putto with Dolphin" by Andrea del Verrocchio.

Statue of David in Michelangelo square

A giant Neptune on a carriage holding what appears to be a scroll, surrounded by humans below and anthropomorphic aquatic creatures made of a contrasting bronze material. This is a work by Bartolomeo Ammannati of the 16th century, and is located next to the Old Palace ("Palazzo Vecchio"). 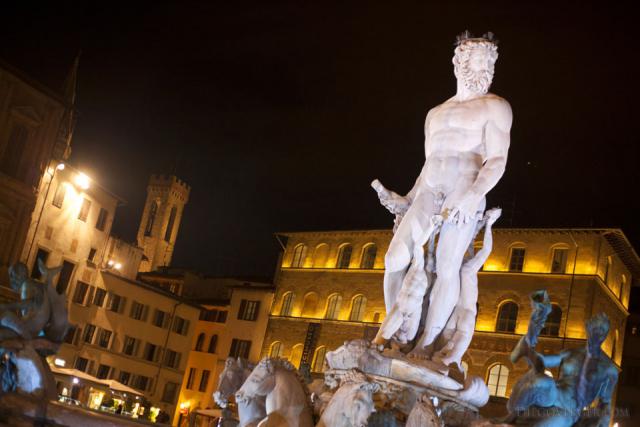 Pond in the Giardino della Fortezza

The pond in the garden next to the "Fortezza da Basso" to the north of the train station Santa Maria Novella.

A defensive fortress of 1536 commissioned by Alessandro de’ Medici.

Patroclus and Menelaus in the Loggia della Signoria

Menelaus holding Patroclus’ body, a scene from the Trojan War. It has also been postulated that this sculpture of Hellenistic style might represent Ajax supporting Achilles.

The "Uffizi" or Offices Gallery was built in the late sixteenth century as administrative offices for the city of Florence, it became a receptacle for many works of art belonging to the Medici, and by the eighteenth century it became a public museum. In the center you can also see part of the Vasarian Corridor which goes through the museum.

Brunelleschi's dome, lantern and north façade of the cathedral

The lantern on top of the dome was completed by the architect Michelozzo in 1461.

The Abduction of Polyxena of 1865

In this other photo of the sculpture you can better see Polydoros’ dead body and Hecuba trying to rescue Polyxena from the hands of Neoptolemus, son of Achilles.

Detail of the right side of the Florence Cathedral front façade 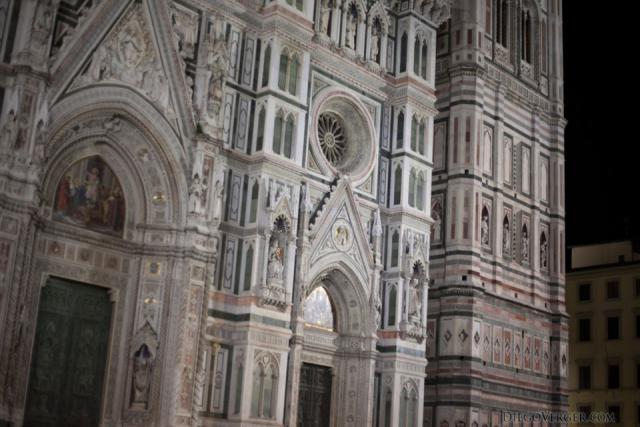 In this night picture you can see the right portal by Giuseppe Cassioli, one of the side rose windows, and Giotto’s Campanile or Bell Tower.

Detail of the Palazzo Vecchio façade 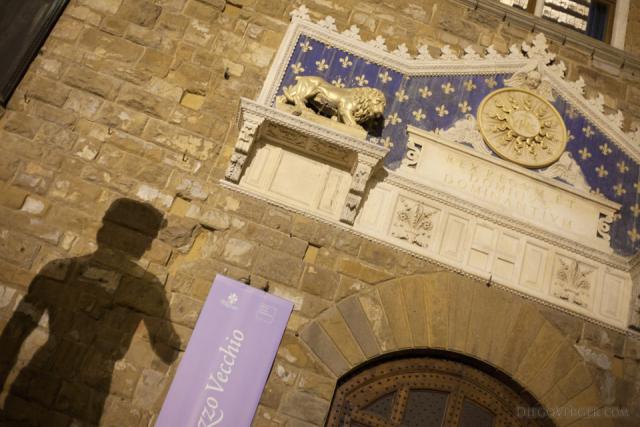 In this photo you can see the ornamental marble above the main entrance to the Palazzo Vecchio, or "Palazzo Della Signoria", with the fleur-de-lis (the emblem of Florence), one of the two lions, the solar disc with the Christogram YHS (monogram of Jesus) and the inscription "REX REGUM ET DOMINUS DOMINANTIUM" (King of kings and Lord of lords).

This marble frontispiece in the Palazzo Vecchio is a vestige from turbulent Renaissance times in the Republic of Florence, and its inscriptions were used to communicate decisions about the city’s sovereignty. In 1527, the Medici were arduously disputing with other factions to preserve the power they had regained in 1512, and maintained during the papacy of Leo X (Giovanni di Lorenzo de’ Medici). But this power struggle was not limited to Florence; in the same year, 1527, in Rome, the pope Clement VII (Giulio de’ Medici) took shelter in the Sant’Angelo Castle, after Carlos I of Spain besieged Rome and vanquished the papal Swiss military guard. In the meantime, the Council of the Republic of Florence was deciding the sovereignty of Florence, and the Christogram and inscription were placed as the frontispiece of the Palazzo Vecchio after one of their voting sessions, in order to declare Christ as their king and therefore symbolically eliminate the authority of the Medici, affirming the sovereignty of the Republic, and pacifying the populace. Although such decisions would not last for long, since after some agreements in 1532, the pope Clement VII was back in power and placed Alessandro de’ Medici in charge of the city as Duke of Florence, and the Republic is dissolved.

According to Modesto Rastrelli in his book "Illustrazione Istorica Del Palazzo Della Signoria detto inoggi il Palazzo Vecchio" [*] of 1792, the original inscription was "YHS, XPS, REX" in golden letters, then spelled in Latin as "Jesus Christus Rex Florentini" (Jesus Christ, King of Florence). XPS is a variant of the Christogram using Greek letters (χριστός = Christus = Christ). But it would be modified in the 19th century; nowadays only the first Christogram can be seen, YHS, with the solar rays, characteristic symbols of the Society of Jesus, or Jesuit order, together with the inscription mentioned previously, which can be seen in the photo.

An extreme view of the imposing bell tower by Giotto di Bondone in piazza del Duomo.

A photo of the historic center of Florence from Michelangelo square ("Piazzale Michelangelo"), to the south of the Arno, which features, from left to right, the Old Bridge ("Ponte Vecchio"), the Old Palace ("Palazzo Vecchio"), Giotto’s Bell Tower, the Duomo or Cathedral Santa Maria del Fiore, the National Central Library of Florence (the building with two towers overlooking the river), and the Basilica of the Holy Cross ("Basilica di Santa Croce").